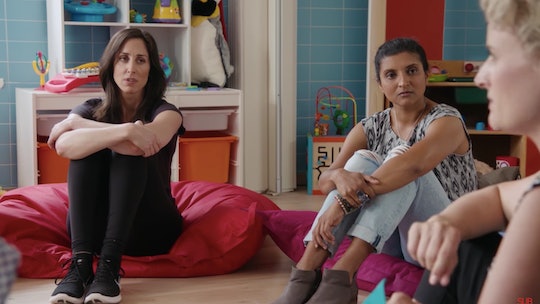 On Netflix's upcoming original comedy Workin' Moms, protagonist Kate struggles to "have it all." Trying to balance a new baby with her career while staying connected to her husband is something many moms can relate to — including the actress behind the character. In addition to starring on the show, she's the creator, executive producer, and writer. Plus, she's a mom herself. But who plays Kate on Workin' Moms?

Kate was created and brought to life by Catherine Reitman. Her name might ring a few bells, because she comes from a showbiz family. Her dad is director Ivan Reitman, known for such classics as Meatballs, Ghostbusters, Kindergarten Cop, Twins, and Junior. And her brother Jason Reitman is a writer and director, too; you might be familiar with his work in Juno, Young Adult, and Tully.

Catherine Reitman has been acting in film and television for decade, popping up in everything from Charmed to Judging Amy back in the day. She's provided her voice to several characters on Family Guy, American Dad!, and The Powerpuff Girls. But perhaps my personal favorite Reitman performance is her recurring role on It's Always Sunny in Philadelphia as literal cat lady Maureen Ponderosa. You might have spotted her on Black-ish recently, too.

Reitman visited the Romper offices ahead of the show's premiere on Netflix (it is in it's third season in Canada) to talk about why she wanted to make the show and where the inspiration came from. She explains that each of the four main characters in the show were based on some part on her own experience — whether that was her postpartum depression, or her professional ambition. And it's clear that the show is very personal to Reitman specifically.

For example, Reitman points to a few moments from the show that were based on real life experiences (also, her husband in the show is played by her actual husband). In one, Kate is in a meeting with a bunch of male colleagues where everyone is playfully ribbing one another. But when one man jokingly asks if Kate's infant son is calling the nanny "mommy" yet, Kate bursts into tears leading to an awkward silence both hilarious and relatable. Reitman explains that this situation actually did happen to her — almost exactly.

Another real-life moment on the show was Kate's frustration that she doesn't seem to be producing enough milk, and her son Charlie doesn't seem to want to latch on. Well, it turns out Reitman's real life son didn't latch on much either. In one scene, Kate is attempting to breastfeed, and the baby in the shot is her actual baby. She says she figures it'll be perfect for the scene since her son "hates her boobs," but then he latches on, and all is right in the world for just that moment.

In another memorable moment, Kate is jogging with her baby in the woods and comes across a bear — who she manages to scare off by producing a warrior cry of huge magnitude. Unfortunately, this is one story that wasn't based on a real experience. But seeing Reitman, I wouldn't be surprised.