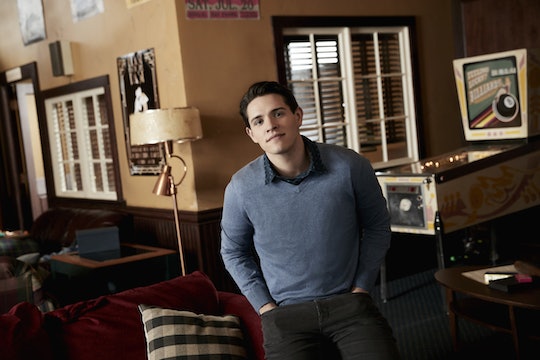 'Riverdale's Kevin Is A Relative Newcomer

The Archie comics-based TV show, Riverdale, is finally here and whether you're excited about the show or very skeptical of how it will compare, you should still at least give it a try. Who knows, it may surprise you. While the show is much darker than the original comics, the characters haven't change. Along with Archie, there's Jughead, Veronica, Betty, Josie and the Pussycats, and Kevin. So who plays Kevin on Riverdale? He comes in the form of newcomer Casey Cott.

According to IMDb, this is Cott's first role ever, however it seems acting is in his blood. His older brother, Corey Cott, starred in the Broadway musical Newsies for two years. As far as first roles go, this is great one for Cott, not only because Riverdale has the potential to turn into another one of The CW's popular teen dramas, but also because he gets to play the first openly gay character in the Archie comics.

Kevin didn't arrive in the Archie comic book world until 2010 when he first appeared as a new student at the school. Described as "one of the nicest boys in school," he quickly became the new school president of Riverdale High. Before he started hanging out with Archie and friends, he hung out with a nerdier crowd that included his friends Wendy and William.

Because his father was in the military, Kevin's family moved around a lot, but they're in Riverdale to stay. At first Veronica was interested in him, not knowing he was gay, which eventually led to him joining up with Archie's group and becoming good friends with Archie himself. Like his father, Kevin wants to join the military and is an advocate for social justice.

It hasn't been said yet if Kevin will be gay in the TV series, but it'd be shocking if he's not. Kevin's sexuality was a big deal when it was revealed in the comics and though someone's sexuality should never be their only defining characteristic, it would be disappointing for his character to be altered in such a distinctive way. And the fans would definitely have something to say about it.

You can see how Kevin and the rest of Archie's gang are portrayed on Riverdale when the show premieres on Thursday, Jan. 26 at 9 p.m. ET on The CW.