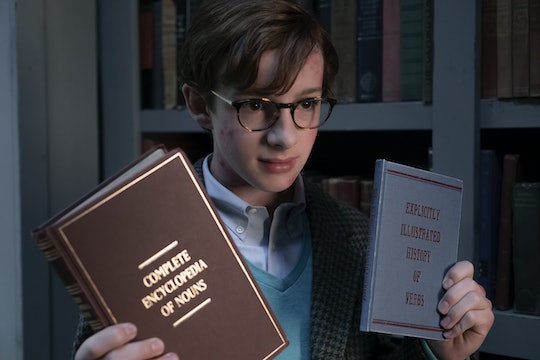 Klaus Is A Breakout Star On 'ASOUE'

Although Neil Patrick Harris is the star of Netflix's new series, A Series of Unfortunate Events, fans should keep a look out for the new up-and-coming taletns that are playing the Baudelaire children, particularly in regards to Violet and Klaus. (Don't get me wrong, Sunny is insanely cute, but as a baby, her acting is currently semi-limited.) Fans may recognize Malina Weissman, who plays Violet from various other projects, but who plays Klaus on Netflix's A Series of Unfortunate Events? The middle Baudelaire child is played by young actor Louis Hynes.

Hynes is fairly new to the small screen. A Series of Unfortunate Events is only the second show he's ever been on and his first staring role. Prior to the Netflix show, Haynes was on the History Channel's docudrama Barbarians Rising as the young Alaric for two episodes last year. After his work on A Series of Unfortunate Events, though, it won't be surprising if we start seeing a lot more of Hynes in the near future. The young actor makes for an excellent Klaus who's known in the books for his love of reading and his glasses. Hynes has perfected Klaus' ability to quote information from the many non-fiction books he's read verbatim while using his matter-of-fact tone of speaking.

Thanks to their outstanding portrayals, the Baudelaire children truly come to life in this new show. They're clearly the breakout stars of the show and really drive the plot forward in intriguing ways. Neil Patrick Harris' role as Count Olaf is also perfectly cast. The actor's theater experience really shines through in the series, and he brings the perfect level of hilarity and villainy to the character that fans of the books will appreciate.

Even if you haven't read the series, you'll love this new Netflix original. Although the show itself will try to persuade you not to watch it, you definitely shouldn't listen. While there are definitely plenty of unfortunate events that occur as Lemony Snicket warns, the show is also smartly funny, filled with a cast of very interesting, and often times crazy characters, and includes enough twists to leave you wanting even more.