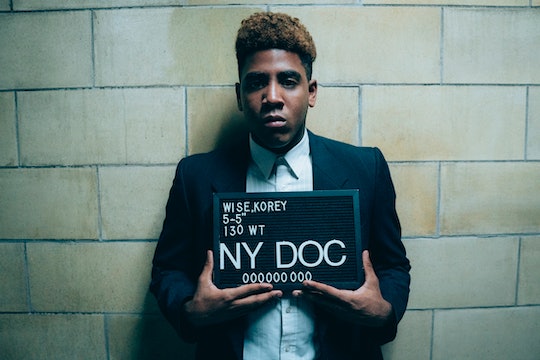 Netflix'sWhen They See Us — written and directed by the Academy Award-nominated Ava DuVernay — is based on the true story of the Central Park Five — who were convicted and later exonerated of the 1989 assault of Trisha Meili while she was jogging. One of the boys was sentenced to more jail time than the others, and his heartbreaking story will have you wondering who plays Korey Wise on When They See Us.

His name is Jharrel Jerome, and I'm going to need you to remember it. The actor is only 21, but he's already been a part of some impressive projects like the critically-acclaimed Mr. Robot and DuVernay's Moonlight, where he played Kevin at age 16. In When They See Us, he faces the challenge of portraying Wise — who was sentenced as an adult and therefore sent to Rikers Island. As reported by Newsweek, Wise was "was subjected to insurmountable abuse, violence and extended periods of time locked in solitary confinement."

Jerome is from the Bronx, and he grew up knowing the basic facts of the Central Park Five case. His parents taught him rules to help him stay safe in the streets as a young black man. But he said that even the Ken and Sarah Burns documentary that changed the way people view the men today lacks something that DuVernay's series has. The documentary, he said, "...just has the facts but you don’t have the emotion, you don’t have the family aspect, you don’t have what the script will give you," he told Newsweek.

Jerome met Wise to prepare for the role, and had a moment with him that I expect was very surreal. "The second I met him, he took his chain off and put it around my neck, and he said, 'You’re Korey Wise now,'" he said. But instead of feeling pressure, Jerome took strength.

He told Newsweek that he never had to call the hotline that DuVernay had on set for the actors if they needed counseling. "I just needed to call Korey. Korey’s smile, Korey’s energy—that was the therapy for me. That’s what kept me grounded in the work and through all the pain, through all the sorrow that came with this role," he said. "He's a beam of light."

Reading that quote made me emotional. So, it's understandable that thanks to Wise, the experience of filming When They See Us was more than just a job for Jerome. "After getting to know him and getting to spend time with him, he’s become more than just a man I play. He’s become a role model and an inspiration," the actor said in Newsweek.

Netflix is giving the story of The Central Park 5 the platform to reach a whole new generation. But Jerome's expectations of the show are humble. "I know if I go back down my block or even around my block, I’m the only young black man with a platform and a voice to be heard. So I want to be the voice for everyone on my block and in my community." I think he's going to become a voice for more people than that when When They See Us drops on Netflix May 31.