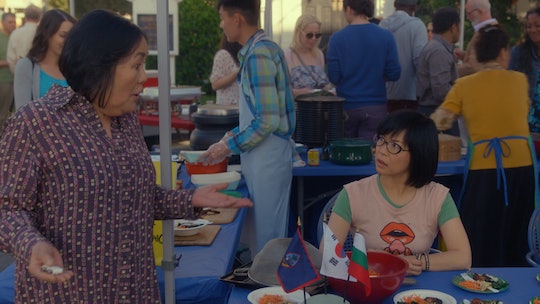 Who Plays Kwan In The 'Gilmore Girls' Revival? Lucas Jaye Is Ready For Big Things

To everyone's shock (and some dismay), Season 7 of Gilmore Girls seemed to prove Mrs. Kim right since Lane got pregnant the first time she and her new husband Zack had sex. With twins, no less. So now that the revival is upon us, nine years laters, Lane's twins are much older. But who plays Lane's son Kwan in the Gilmore Girls revival? For such a young kid, he's already on the way to building a pretty impressive resume, to say the least.

Kwan is played by an actor named Lucas Jaye, who is already getting recognized for playing Taylor on Fuller House. Kwan's brother, named Stevie, is played by another young actor, named Ezra Dewey, so apparently the boys are not identical twins. However, if their social media accounts are any indication, the two young actors are already pretty much the best of friends. There's no doubt that this young friendship will lead to some truly adorable Kim-Van Gerbig family moments. I personally feel that Lane was something of an unsung hero of the series, and much as I wish her storyline had gone a different way, I am excited to see how her character has developed as a mom, and how this has affected her relationship with her own overbearing mother.

Lane's kids would be about nine years old in the series, and it looks like Jaye is about that age as well, just beginning his acting career. He played "Four-year-old boy" in the 2013 film Alchemy, which would make him just the right age to be Lane's kid. His Instagram, which says it is managed by his mom, shows a really happy child who is just pleased as punch to be a part of this whole show business thing. Some pictures of him and his on-screen twin, Ezra Dewey, show that these two had a lot of fun together and are ultimate friendship goals.

Jaye also seems to have a lot of fun with his little sister, including putting on a princess crown for her amusement, a noble sacrifice that all good big brothers do (or little brothers, as in my case). Jaye appears to work often on commercials in addition to his bigger roles, but after Gilmore Girls premieres, who knows what the future holds in store for him.