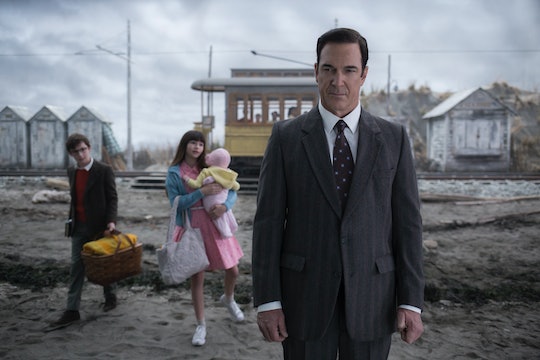 This 'ASOUE' Star Has Basically Been In Everything

One of the most underrated roles, possibly ever, has to be Lemony Snicket, the narrator of the series telling the story of the Baudelaire children and Count Olaf. So it pretty much went without saying that whoever played Lemony Snicket in Netflix's A Series of Unfortunate Events would have some big shoes to fill. Luckily, Patrick Warburton manages to pull it off, using dry humor and sarcasm to keep the story rolling along. And he's also one of the most underrated faces in Hollywood, in my humble opinion.

Warburton is one of those actors you recognize, but can't remember their name without googling it. Sorry, dude, but it's true. But he's actually a legend: he played Puddy in Seinfeld, the cheesy, high-fiving car salesman that Elaine dates on and off again throughout the series. But Warburton is basically the king of sitcoms that get cancelled after a few seasons. He was on the sitcom Rules of Engagement for seven seasons, along with David Spade, that I'm not too ashamed to admit I secretly used to love. And he was a lead in Crowded, which he starred in alongside Carrie Preston, that was cancelled by NBC after one year.

In addition to sitcoms, Warburton was also on The Tick, a short lived television series based on the comic. But he's literally been in the business forever, so you might know him from a whole bunch of other projects. The thing about Warburton is really his voice — it's one of those big, deep voices that is perfect for a narrator like Snicket. This role was made for Warburton.

Warburton is married to Cathy Jennings and they have four teenaged children together. Judging from his social media accounts, he seems like the most "normal" celebrity in the world, posting pictures of him hanging with his kids, just like us regular people. It must be weird when your dad is Puddy.

Warburton said in an interview that he and his wife used to love watching Seinfeld together before he ever read for the part of Puddy. "It was our favorite show," he said, while adding:

Two weeks before I actually got to do an episode, I remember looking at [my wife] and saying, ‘God I wish I could be on this show’, and then I got a chance to go in and audition and read for Jerry and Larry David. It was just for a single episode but they liked the character and brought him back.

Warburton added that he was busy with another show, Dave's World, (see? I told you he was in everything) and couldn't do Puddy for two years.

"Then they cancelled Dave’s World and I crossed paths with Jerry and he said, ‘Do you want to come back on the show during the ninth season?’ That was a great opportunity," Warburton added.

Between Seinfeld, Dave's World, and his other work, Warburton certainly has some TV credibility. But judging from the early reviews, it looks like he might go down in history for his Lemony Snicket. He's just that good at telling an unfortunate, no good, miserable story.