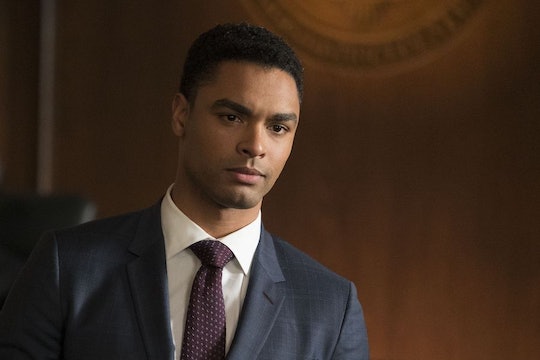 Leonard On 'For The People' Is Your Next TV Crush

Prepare yourselves, folks, because there's a new Shonda Rhimes show heading your way. The new series, titled For the People, is a courtroom drama that will follow young attorneys as they learn how to be district attorneys and public defenders in the "highest court in the land." On the side of the district attorneys is Leonard Knox, but who plays Leonard on For the People? Regé-Jean Page snagged the role and to say he's dreamy is definitely an understatement.

Unlike some actors, Page didn't always know he'd go into acting. In fact, in an article for Interview he revealed that he was actually studying sound engineering when he discovered the British National Youth Theatre. At the same time, Page was also in a band with his younger brother, however, when he discovered the National Youth Theatre everything changed. "It was the first time I'd ever been in a room with a group of kids who took acting as seriously as I did and went as deep as I wanted to go," he told the outlet. "I pretty much immediately ran away from university to be an actor."

Though it took two years of auditions, Page was then accepted into the Drama Centre, the London-based university that has also churned out successful actors like Tom Hardy, Luke Evans, and Gwendoline Christie. Since then, Page, who was born in Zimbabwe but moved to London when he was 14, has worked as an actor, getting his start on the stage. His first role was in the play The History Boys at The Crucible theater in Sheffield. From there, Page went on to appear in British television in series like Casualty, Fresh Meat, and Waterloo Road.

In the States, Page was first cast in an ABC pilot called Spark, which unfortunately never made it to screen. However, in the same year he was cast in the Roots remake as Chicken George. Now, besides For the People, he'll also be in the new film, Mortal Engines, which comes out in December.

As for his personal life, Page keeps things pretty private. He's not too big on social media, and didn't start posting on Instagram until last summer. He also has less than 800 followers, though that'll most likely change once people fall in love with his character on For the People. Page mostly used his social channels to celebrate and promote his work, however, he does occasionally like to share pics of himself relaxing on the beach, making all his followers jealous. Outside of that though, Page keeps most of his personal life off of social media, which is of course his prerogative.

When it comes to his new role as Leonard, Page hasn't been shy to share his excitement about it, and who wouldn't be excited to join Shondaland? Page told Variety that he finds Leonard "fun to play with." He also added, "He's very complex, he's got a lot of shadow and a lot of things withheld that I'm looking forward to exploring."

Additionally, Page went on to applaud the writing on the show stating:

The script feels like the world I actually live in, it feels like there is a streak of hope running through it. It's where you find the real high stakes in the world, it's where you find people fighting for justice in the little sense of the word. It's really cool to see a group of young people figuring out how you do that, how you fight for justice.

The show sounds amazing and you can see it when For the People premieres on Tuesday, March 13 at 10 p.m. EST on ABC.