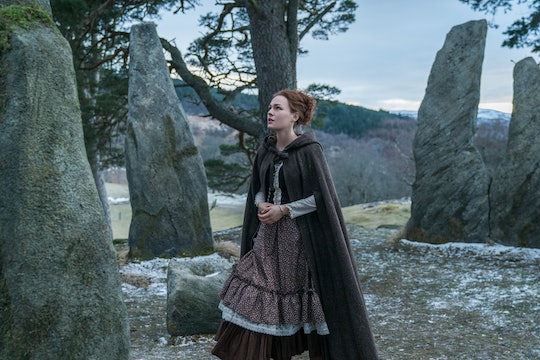 Brianna Gets A New Traveling Companion On 'Outlander' Season 4

The cast of Outlander has seen several new additions in its fourth season. Claire and Jamie have settled in the States, which led to them making new friends and enemies; the same is true for Brianna, whose journey takes her to unexpected places. While trying to save her parents from an upcoming fire, Brianna meets Lizzie, who will become entwined in her story going forward. But who plays Lizzie on Outlander? And who is Lizzie?

After Brianna ventures through the stones and into the past to warn Jamie and Claire, she meets the young girl right when she's about to board the ship heading toward North Carolina. Lizzie's father begs Bree to take his daughter, as they are indentured servants and an older man is trying to purchase Lizzie to make her his concubine. Brianna can't possibly refuse, so she winds up taking Lizzie along. She plays a pretty big part in the action of the book, so fans are excited to see what she'll be like on the show.

When she's introduced in Season 4, she'll be played by Caitlin O’Ryan. Outlander will be O'Ryan's very first role and mark her television debut. Because of that, she's a little bit of a mystery, but fans will surely get to know her better as the season continues. Until then, social media can offer a few hints about O'Ryan.

O'Ryan is a recent graduate of the Three Year Course at the Oxford School of Drama, per their official website. She's only been out of school for a year, so landing a role on a show as big as Outlander is some serious success right out the gate. Her Twitter profile states that she's located in Manchester and London, and she describes herself as an "actor from t'north." She also has a shoutout to the poem "Evidently Chickentown" by John Cooper Clarke (which you might remember from its use on The Sopranos) in her bio.

On Twitter, O'Ryan called Lizzie "a dream of a character to play" while expressing hope that she could do her justice. She also thanked her new cast mates for welcoming her onto the show, praising them as "seriously cool." When she's not posting Outlander-specific content on her socials, she mentions theatre production she loves. She also shares links to Sleep Walk for Shelter, a fundraising effort to alleviate homelessness. As its Just Giving page states, "It's a 10k walk through London in the evening. It will be cold and dark but I will be going home to a warm and secure house. It will be nothing compared to those who sleep rough every night without shelter."

O'Ryan's Instagram has less than 10 photos, including pictures from the Sleep Walk. She has posted a few stunning travel shots from Bruges and Lisbon, but no clues about her role on Outlander aside from the casting announcement. However, co-star Natalie Simpson (who plays Phaedre) posted a picture of herself and O'Ryan in costume on her own Instagram, giving fans their first glimpse of Lizzie.

Viewers don't know much about her (or O'Ryan) yet, but soon she may feel like part of the family.