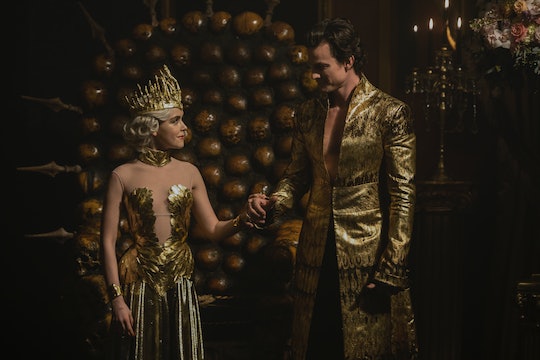 Chilling Adventures of Sabrina is already back for Part 2 after premiering last October with much fanfare. The second season ends with a shocking twist that brings the Dark Lord back in angelic form, as the fallen archangel Lucifer Morningstar. Now that he isn't a cloven-footed beast anymore, viewers may be wondering who plays Lucifer on Chilling Adventures of Sabrina — especially since certain factions of CAOS Twitter have already dubbed him "Hot Satan." Australian actor Luke Cook has tackled a ton of storyline in just one episode.

Cook has previously booked TV roles on shows like How To Get Away With Murder, Modern Family, and MTV's Faking It, and he has a slew of projects still in production, too. He also played a minor character in Guardians of the Galaxy Vol. 2, and, funnily enough, he played Dorian Gray in The Librarians. (Dorian Gray also pops up as a character in CAOS.) But Cook, despite a formidable iMDB list of shorts and web series to his name, has never had a series regular role before. So CAOS may set him up for a big opportunity, here.

We don't meet Cook-as-Lucifer until the final episode of the season, when the Dark Lord finally takes his angelic form, thanks to Lilith, whom Sabrina knows and trusts as Mary Wardwell. Under her careful guidance, Sabrina unknowingly fulfills a prophecy which resurrects Lucifer to take Sabrina as his rightful queen. Oops! There's also a major twist regarding Sabrina's parentage that comes to light when Lucifer is revealed to be her biological father. Needless to say, being both his daughter and his queen sits less-than-well with Sabrina, and she frantically begins trying to figure out how to undo what's been done. It takes the Spellmans three tries, but, eventually, they defeat Lucifer.

Sabrina's boyfriend Nick sacrifices himself to be a human host for Satan's soul, vanquishing Lucifer the archangel. Lilith is crowned the Queen of Hell and she descends to the underworld with Nick to lead the Church of Night. Lucifer Morningstar, as viewers know him, is gone, but it this really the last the show is going to see of him? He returned and was defeated again pretty quickly — remember, this all took place during the course of one episode — so I'd wager that the series isn't quite done with Lucifer just yet.

When asked if fans would see Lucifer return in Season 3, Cook told Entertainment Tonight, "I wish I could answer that for you. I don't even know myself, it's all a mystery. I hope so! I haven't heard anything, but fingers crossed."

Since the Dark Lord still exists trapped in Nick's body, and Sabrina has made very clear to her friends that she intends to rescue her beau from his sacrificial fate, I think it's likely the Greendale squad will tangle with Satan again before the series is over. He is the main antagonist, after all, and most genre series that deal with biblical struggles of dark and light have evil rulers that reincarnate again and again (see: Buffy, Harry Potter, et al). At least one more showdown with Lucifer Morningstar seems inevitable.