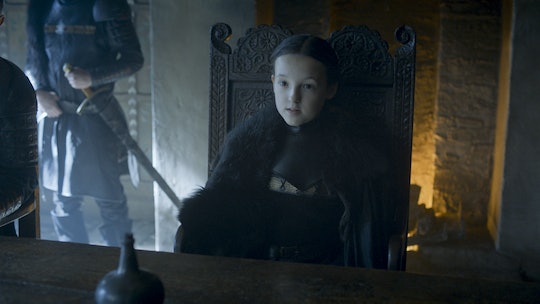 Who Plays Lyanna Mormont On 'Game Of Thrones'? Remember The Name Bella Ramsey

On Sunday night's Game of Thrones, a lot of things happened. Arya was stabbed in the gut, Sandor Clegane made a not so triumphant return, and Margaery Tyrell reminded us all that she's still got some tricks up her sleeve, we just don't know what they are yet. We were also introduced to everybody's new favorite precocious badass, ten-year-old Lady Lyanna Mormont on Game of Thrones, played by Bella Ramsey.

As of Episode 7, Jon Snow, Sansa Stark, and Ser Davos Seaworth have just started their campaign to gather more men for the siege to take back Winterfell. And so far, it is not going that well. They convinced the Wildlings, but the Wildlings have been pretty much all-in for Jon Snow for a while now, so that wasn't that big a surprise. What was more difficult was convincing the Northern houses, who at one point were unfailingly loyal to the Starks, to renew that loyalty now. After Robb Stark's tragic defeat at the Red Wedding, and all the messiness that transpired after, this wasn't as simple a task as it first seemed. Some houses were pretty hesitant to throw-in with what looked to be a dying House led by a bastard ex-Lord Commander, and a woman who had already been married off twice to other houses.

Lady Lyanna Mormont, the kind of ten-year-old I would definitely not like to meet on the playground, was no exception. Little Lyanna was one tough cookie to crack, and it took a lot of smooth talking from Ser Davos to gain her support. Bella Ramsey was absolutely pitch perfect in the role, and all viewers were left wondering, who is this kid?

It turns out, there's not much to know just yet. This is Ramsey's first role on the silver screen, and according to her IMDB page, her first big role ever. But it is most definitely not the last we'll be seeing of her. She has already been cast as Mildred Hubble, the heroine of the upcoming British television series Worst Witch. The series is based on a book series of the same name by Jill Murphy. The books have been adapted for television once before, and the first The Worst Witch, which was much beloved in the UK, ran from 1998-2001. It will follow Mildred's adventures at Miss Cackle's Academy for Witches as she struggles not to be the worst witch in class. If Mildred Hubble is even half as tough as Lyanna Mormont, I have a feeling she'll do just fine.