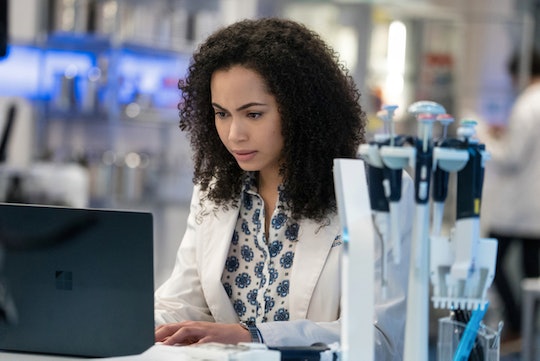 Macy On The 'Charmed' Reboot Is No Stranger To TV

With the premiere of the Charmed reboot right around the corner, fans are trying to get as many details about the show’s cast as they can. The series will follow a new set of sister witches — Maggie, Macy, and Mel. Macy Vaughn is the eldest of the three and has been recently reunited with her half-sisters. Her role as the older sister will be a crucial one, so who plays Macy on the Charmed reboot?

British actress Madeleine Mantock will take on the role of Macy, and there is a reason she may look really familiar to some fans. The 28-year-old has had a number of recurring roles on TV series in the past, including CW’s sci-fi series The Tomorrow People and the AMC action drama, Into the Badlands. Her character on Charmed is a completely new character, but she does share some similarities from some of the original “Charmed Ones.” Macy’s character feels like a combination of two of the original Charmed characters, Prue (Shannen Doherty) and Paige (Rose McGowen). Just like Macy, Prue was telekinetic, but when she was killed off in Season 3, Paige was introduced as a long-lost half-sister in her place.

According to a CW synopsis, Macy is a geneticist, whose mother Marisol has hidden her from her other two daughters, Mel and Maggie, for years. When Marisol tragically dies, Macy develops telekinetic powers and comes back to find her long lost half-sisters. With the help of their Whitelighter, Harry Greenwood (Rupert Evans), the sisters learn of their witch heritage, and “must stand together to fight the everyday and supernatural battles that all modern witches must face: from vanquishing powerful demons to toppling the patriarchy.”

However, despite taking inspiration from key elements of the original, the reboot’s creators are trying to tell a completely fresh story. The show comes from Jane the Virgin producers Jessica O’Toole, Amy Rardin and Jennie Urman, and in an interview with Muse TV at San Diego Comic Con, Urman revealed how they developed a fresh take on the original. “Just the structure in the power of three, and the book of shadows, and Whitelighters are going to be different versions, because you wouldn’t want to do the same exact thing,” she told the outlet. “We want to look at that and change certain elements so that it feels of this moment, but we’re definitely pulling a lot from their mythology.”

In a promo for the series, fans can take a sneak peek at Macy, and how she handles her newly discovered abilities. As she sits at a bar with a friend, an angry outburst causes her beer bottle to fly across the room and smash into a wall. When talking to Harry, Macy initially refuses to accept that she’s telekinetic, demanding the need for scientific proof. In the promo, Mantock revels in her character’s telekinetic abilities, and reveals what she could do with them in real life. “I want to be able to nudge cars,” she jokes, explaining that when cars are parked inconsiderately, she would love to use her telekinesis to push them apart to fit her car right in.

As with any reboot, fans may be on the fence about the telling of their favorite story in a completely new way, but from the looks of it, the new Charmed is just a modern take which would reflect the values of today. Luckily, the series premiere is just around the corner, so whether you’re a fan of the original or just new to the Charmed party, you’ll be able to dive in to the Wiccan fun real soon.