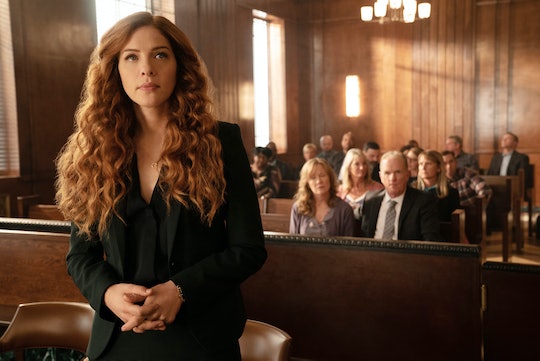 Proven Innocent is a new legal drama on Fox that focuses on the injustice of wrongful convictions. The series is centered around attorney Madeline Scott, a woman who spent 10 years in jail for a murder she didn’t commit. The actress taking on the role may look familiar, which is why some viewers are wondering, who plays Madeline in Proven Innocent?

Actress Rachelle Lefevre has the lead role in Proven Innocent, and if she looks familiar, it’s because she’s been in a number of popular TV shows and films over the years. Lefevre’s most iconic role was of the vampire Victoria Sutherland in the first two installments of the Twilight Saga. She has had recurring roles on series like Under the Dome, What About Brian, and A Gifted Man, and she’s been featured in episodes of popular shows including Law & Order: Special Victims Unit, The Closer, Veronica Mars, and Boston Legal.

In Proven Innocent, Lefevre takes on the role of Madeline, a woman who was wrongfully convicted of murdering her friend when she was just 18-years-old. Her case was a media sensation, so she spent a big part of her life in the public eye. Now, after spending a decade in prison and being freed with the help of her attorney (now law partner) Easy Boudreau (Russell Hornsby), Madeline is a lawyer who represents the wrongfully accused. As she fights for their freedom, she often finds herself butting heads with Gore Bellows (Kelsey Grammer), the prosecutor who put her in prison and still believes in her guilt.

In an interview with Variety, Lefevre said she didn’t want to know if her character was really guilty or not, but that she preferred to play her as someone who believed she was innocent. She noted that the most challenging aspect of playing Madeline was that fact that she was a smart and successful lawyer who missed out on a big chunk of her 20s. Rather than going through normal formative experiences (like college and dating), Lefevre explained that Madeline spent a decade relating to people in prison, which makes her “abrasive at the wrong times or socially awkward or afraid of situations.”

“I want her to be someone who moved around the world never feeling like she fit in, and I think the doubt we’re talking about plays into that, because what if you walked around and you were just afraid that at any moment somebody else knew better than you and they were going to expose you?” Lefevre told Variety. “She takes every client personally because for better or for worse, she sees every client as herself, but even when she’s being a really good lawyer there are lots of times she’s going to cross the line or be inappropriate or not say the right thing or not have the right emotional reaction to something because she hasn’t learned how to do that.”

Madeline’s character is definitely one with a lot of layers and complexities, so it’s nice to see the passion and dedication Lefevre is putting into the role. As a huge fan of Twilight and Under the Dome, I’m just glad to see Lefevre back on screen, doing what she does best.