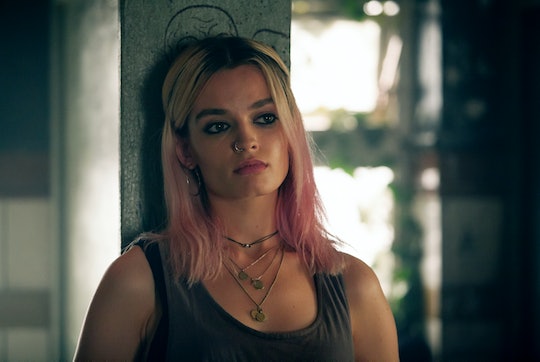 In Netflix’s new young adult series Sex Education, teenager Otis is convinced by a classmate, Maeve, to set up a “sex clinic” to advise fellow students and make a little cash on the side. Otis, the son of a sex therapist, doesn’t have the hands-on experience but he has absorbed quite a bit of knowledge from his mom. Things start to get interesting when Otis realizes he might have feelings for his partner-in-crime. So who plays Maeve in Sex Education?

That would be Emma Mackey. Mackey is a French-British actress (deduced by the flags in her Instagram bio) with just one project under her belt, a TV movie called Badger_Lane. With the immediate popularity of Sex Education, Mackey is now on everyone’s radar, so be on the lookout for more information to come out about her in the coming weeks and months (especially if the series gets picked up for a second season). For now, though, what I know about her is limited to a few articles and her Instagram account.

So here’s what I’ve gleaned: Mackey’s birthday is January 5, as evidenced by this post from her friend from university in 2017. Speaking of uni (as the Brits call it), Mackey appears to have gone to University of Leeds in England. She made quite a few good mates there (yup, I’ve clearly got the lingo down), whom she lived with on Burley Road.

Since she hasn’t posted any university photos in awhile, Mackey has likely already graduated or is simply taking some time off. In any case, that makes her probably somewhere between 22 and 25 years old. And like so many her age, her Instagram aesthetic is gorgeous and a little bohemian. But then again, what most people focus on is her stunning resemblance to Margot Robbie. Seriously, the comments are filled with people comparing the two actresses. I’d say that’s a compliment to both of them.

Mackey has another project in the works, a movie called Summit Fever, but it looks like her focus is on Sex Education right now. The amount of buzz that the dramedy is getting looks to be well-earned, as critical reviews are very positive in addition to the audience praise. Mackey, for her part, seems to be taking it all in stride, enjoying press with her castmates, especially when they’re trying to win her over.

If you’ve already completed all eight episodes, you might be looking for more of the girl with pink hair from Sex Education. Though I can’t say yet whether there will be another season (but it seems likely), for now you can follow her on Instagram. I know I’m going to be keeping up with her career, as well as trying to learn more about her apparent relationship with fellow actor Dan Whitlam. Hopefully, that will be enough to keep me satisfied until her next movie or show.