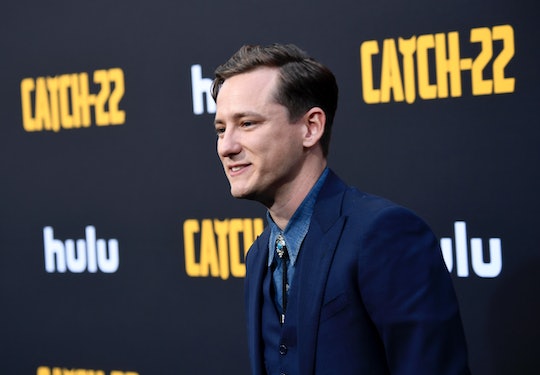 Hulu's adaptation of the 1961 Joseph Heller novel Catch-22 comes from executive producer George Clooney, who also stars as Lieutenant Scheisskopf. The star-studded cast includes House star Hugh Laurie and Friday Night Lights alum Kyle Chandler, but fans of the book may be wondering who plays Major Major on Catch-22, one of the story's most memorable characters. The miniseries adaptation is poised to be Lewis Pullman's breakout role, although he has plenty of film experience and comes from a very famous family.

Lewis is the son of Bill Pullman, best known for a slew of '90s classics including his famous turn in Independence Day. Lewis' film career began in 2013 with a handful of short films, but eventually he worked his way up to bigger productions like 2018 slasher flick The Strangers: Prey at Night and Bad Times at the El Royale, where he shared top billing with Jeff Bridges, Cynthia Erivo, Dakota Johnson, Jon Hamm, Cailee Spaeny, and Chris Hemsworth. But Pullman's most exciting upcoming project by far is his role in Top Gun: Maverick, which Hamm has also been cast in, along with Ed Harris and Miles Teller. Catch-22, however, is Pullman's first series regular role.

Major Major is, of course, one of the novel's more absurd characters. Named Major Major Major by his father, who had a rather unfortunate sense of humor, Major went on to become a Major in the Air Force, effectively making his full name with title Major Major Major Major. His other defining characteristic from the novel is a pitiful resemblance to Henry Fonda. The gag was done away with in the 1970 film adaptation, where Major Major was played by Bob Newhart, who bore no resemblance to Fonda at all. My guess is the outdated reference won't make it into the Hulu adaptation either.

Per Hulu's synopsis, "Catch-22 follows the adventures and misadventures of a US air squadron in Italy in World War II. Yossarian, a bombardier, whose frantic obsession every time he goes up on a mission is 'to come down alive.'" Of course, that gets complicated when the number of missions he's assigned to fly becomes untenable. Military by-law Catch-22 states that flying an unreasonable number of missions is insane and pilots don't have to fly them; however, if a pilot asks not to fly them, he's proving his sanity by making a reasonable request, and must fly. It is, as they say, a catch-22.

Yossarian is played by Christopher Abbott, who's probably most recognizable for his role as Charlie, Marnie's wimpy boyfriend turned heroin addict on HBO's Girls. Clooney, who also steps in to direct a couple of episodes, according to The Hollywood Reporter, remarked on the pressure of casting a great literary character at a Winter 2019 TCA panel, half-joking, "We knew we had to cast somebody that you could root for even when he did really rotten things…and he [Abbott] was kind of likable, so it worked out fine."

The entire six-part series is currently streaming on Hulu.