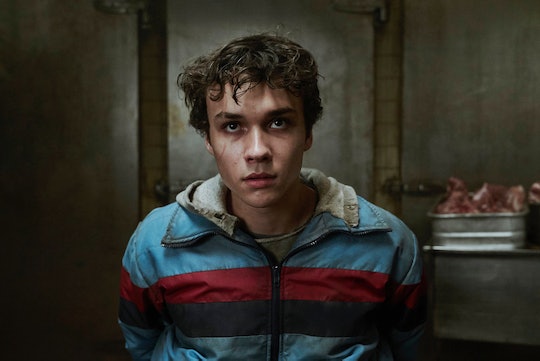 Your newest TV obsession, Deadly Class, is here, and it’s time to get to know the main character. If you watched the trailer, you know the series is about a teenage boy who discovers he has some very unique abilities, and enrolls in a school for similarly gifted young people. If you’re wondering who plays Marcus on Deadly Class, get in line, because Benjamin Wadsworth is fairly new to the biz, but he’s ready to take on the intriguing lead role.

Marcus Lopez Arguello is the newest addition to King's Dominion. Plagued by tragedy and trauma, Marcus still finds himself an outcast at the school in regards to both the students and the teachers. But with the help of his sponsor, Saya (Lana Condor of To All the Boys I’ve Loved Before fame) and Master Lin (Benedict Wong, Marvel hero from Doctor Strange and Avengers: Infinity War), he might just be able to keep up.

A little backstory on the show: Deadly Class is based on a graphic novel series of the same, which began its run in 2014. It’s got the comic book, martial arts vibe of Kill Bill, the attitude of the UK series Misfits, and the fantasy boarding school of so many films and series before it, from the X-Men movies to the more recent spinoff of a spinoff, Legacies. See for yourself:

As it turns out, Wadsworth didn’t even go out for the part of Marcus. He told the Toronto Star that he auditioned for the supporting role of Billy, which eventually went Liam James. In preparation, he read the graphic novels, which got him pumped up to play the lead. At just 19, Wadsworth is the youngest of the actors playing students in the series, which is fitting, as Marcus is, as Wadsworth describes him, a “damaged puppy, this cute little thing; whenever you try to go down and pet him he may bite you.”

According to Wadsworth, Season 1 wrapped just a little over a month before the show’s Jan. 16 premiere. Wadsworth’s Instagram and Twitter accounts are filled with photos like the one, showing he obviously had an incredible first experience as a lead actor on a series.

Prior to this, Wadsworth may be best known for appearing in the series finale of the beloved MTV series Teen Wolf. He even still keeps in touch with co-stars Tyler Posey and J.R. Bourne. But the role of Marcus is one that he could really relate to: He told People that he was homeschooled, so, like Marcus, he didn’t have any school friends. “I guess it was my first high school experience,” he said about filming the show.

Right away, there’s a bit of a spark between Marcus and Saya. But while Condor admits to being a bit of a flirt on set, Wadsworth keeps things professional. After all, he’s dating Stella Maeve, star of another SyFy series, The Magicians. And the two are pretty dang cute together:

There are ten episodes of Deadly Class headed your way, so get ready for a lot more of Wadsworth. If the series is as big as it looks like it might be (it was produced by the Russo Brothers, the current kings of the Marvel Universe), he’s about to hit super stardom.