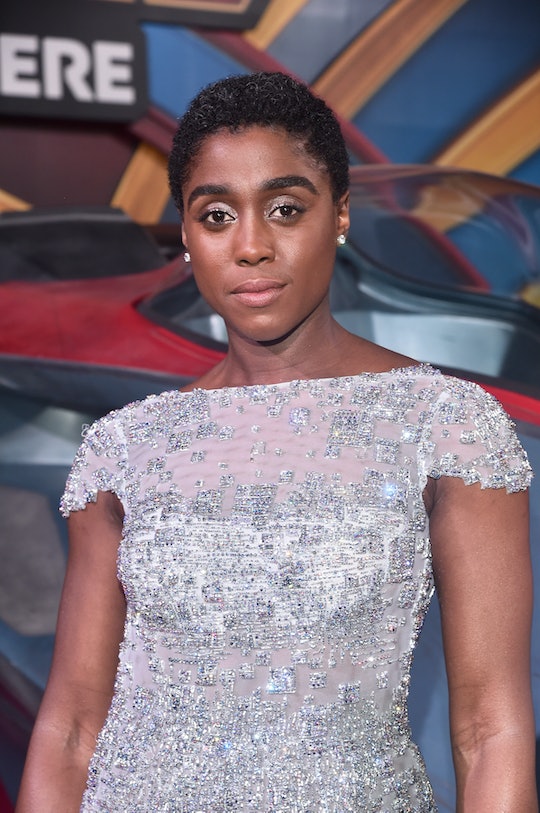 The long-anticipated premiere for Captain Marvel is finally here, and while fans are elated to finally see a woman starring in a superhero action film, it's not Brie Larson's Carol Danvers the internet has been buzzing about. Not exclusively, anyway. Captain Marvel also introduces viewers to Maria Rambeau, Danvers' best friend and former co-pilot, who's played by actress Lashana Lynch. But who is the actress? Before you see the movie, here's what you need to know about this Captain Marvel character.

Lynch, 31, is relatively new to Hollywood as well as Marvel Comics, according to PopSugar. As noted on her IMDb page, the British actress is known best for roles in Brotherhood and Fast Girls and she also appeared in Still Star-Crossed and Bulletproof.

Lynch recently won the Breakout Actress of 2018 award at the Capri Hollywood Film Festival, posting a picture with her statuette on Instagram. "Whoop! Breakout Actress 2018 Award to perch on my pillow tonight!" she captioned the proud pic from December.

The actress is also an unapologetic supporter of women, specifically black women, as seen through her social media presence. Lynch recently shared a photo celebrating her natural hair for World Afro Day, along with a statement about how "PROUD" she is of her hair.

Lynch revealed in an interview with PopSugar that she has long been a fan of the comic book empire, and even auditioned for Black Panther. She told PopSugar she begged her manager to get her an audition for the film, but the stars didn't align; she revealed to the outlet that she was "shooting a series at the time," and while casting directors "loved [it]," there were "age issues" with the two roles she was up for "and that didn't happen."

Lynch's dreams of appearing in a Marvel film weren't totally crushed, though. After losing the Black Panther role to Letitia Wright, whom she described to PopSugar as "bombastic," she was cast in Captain Marvel, according to Entertainment Tonight. Lynch told PopSugar her character, Maria, "is the mother of Monica Rambeau, who we know from the comics."

Monica — also known as Spectrum Photon, according to Screen Rant, and the second coming of Captain Marvel — is the better known Rambeau. According to Bam! Smack! Pow!, her character features prominently in the "Captain Marvel" comics, and others like "Amazing Spider-Man." The outlet noted that Monica's first appearance pre-dates her mother's by almost two years.

In fact, the film will be set before the comics, however, according to Entertainment Weekly, so those who read them will get plenty of new information from watching Captain Marvel.

Lynch told ABC 13 her character, Maria, and Larson's Danvers "are both standalone, very unapologetic" female characters. She added, however, that together they're a force to be reckoned with.

"They are both standalone, very unapologetic, very grounded, intelligent, very talented women," she told ABC 13. "But when they come together, they rub off on each other so well and they make each other feel like they can easily be the best versions of themselves."

Captain Marvel is one small step for women in the superhero film realm, and one giant leap for Lynch's career. There's no telling where she'll go from here.