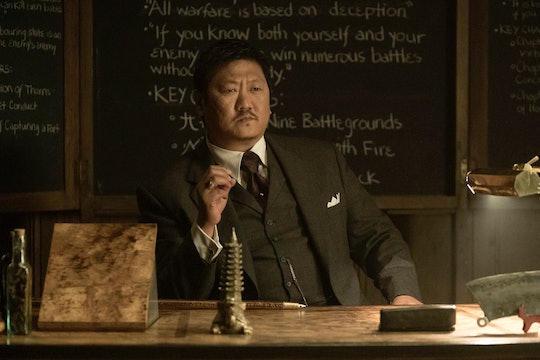 Syfy's new series Deadly Class has a very apt title: it follows a school where every student is a descendant of assassins and killers, each one a mini murderer there to learn more about the art of the kill. The school's leader is Master Lin, who might be a familiar face to some audience members. But who plays Master Lin on Deadly Class?

Benedict Wong plays Master Lin every Wednesday on Syfy. You may recognize him from Netflix's Marco Polo, where he played Kublai Khan, or Marvel's Doctor Strange, where he played Wong. But those are far from his only credits. Wong recently appeared in Black Mirror (the episode "Hated in the Nation"), though with the exception of Deadly Class and Electric Dreams, he seems to have been focusing on film lately. He was in Avengers: Infinity War and will be in its upcoming sequel Avengers: Endgame. He appeared in Annihilation, and has three movie roles coming up this year: Gemini Man, The Personal History of David Copperfield, and Lady and the Tramp.

However, Wong has been working in film and television since the early 1990s. He had several one-off TV parts before landing a regular role in the mini-series Supply & Demand in 1998. He co-starred in 15 Storeys High and had multi-episode arcs in tlc and State of Play. He's worked so steadily over the last two decades that it's almost a guarantee that you've seen him in something.

In 2016, while talking to Den of Geek about his role in the now-cancelled Marco Polo, Wong discussed the difficulties he had early on in his career. He had trouble landing roles that reflected his own British-Chinese background; he was from Salford in Manchester, England but none of the characters he played could say the same. Though many of his friends in Manchester landed auditions with ease, Wong struggled to find work in his hometown. At times, it was disheartening.

"You sometimes found you were hitting a bit of a glass ceiling with people's perceptions of who you are and what characters you could play," Wong said. "I ended up playing a lot of East Asian parts yet not playing anyone from Salford." The sitcom 15 Storeys High was an opportunity to portray a character who reflected his British-Chinese identity a little more.

Master Lin is unlike Wong's optimistic character Errol Spears on 15 Storeys High or the heroic Wong in the Marvel Cinematic Universe. Master Lin runs a brutal school with a highly unusual curriculum and he reflects that tough atmosphere. Though Wong told Newsweek that Lin wanted the best for his students, his way of getting it wasn't to "kill them with kindness." Lin's first scene involves hitting a student in the face, which Wong described as a "real jolt, a statement of intendment: Do not f**k with this guy."

Wong indicated that Lin was preparing the kids for a "greater cause," though exactly what that means hasn't been revealed on the show yet. Viewers will have to wait and see what Lin's plans are, as Deadly Class is sure to keep them guessing.