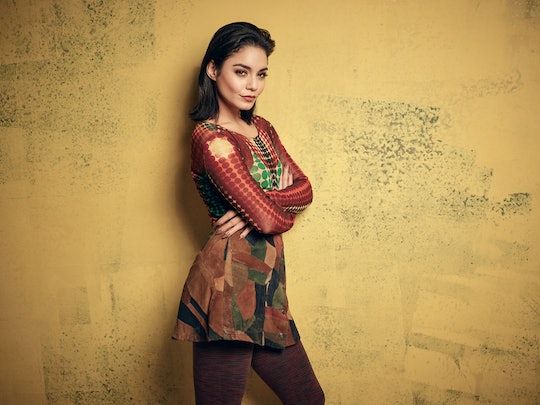 Here's Where You Know Maureen In 'Rent: Live' From

As anyone who's seen a high school production of Rent knows, mounting a version of the often graphic show within the constraints of network television is going to be a challenge, but Fox thinks it's up to the task. It chose Rent, Jonathan Larson's 1996 rock musical about artists living in NYC's East Village during the height of the AIDS epidemic, for its live musical production this year. And the network is bringing back one of its veterans to play Maureen in Rent: Live. Vanessa Hudgens, who has enjoyed a gig as a judge on Fox's So You Think You Can Dance for the past couple of seasons, takes on the role.

Hudgens' big break came playing Gabriella Montez in the High School Musical franchise, but she's been a musical theater performer since she was eight years old, and this is actually her second time working on a major production of Rent. She also appeared in a 2010 production staged at the Hollywood Bowl, where she played Mimi Marquez, the AIDS-afflicted dancer who returns from the brink of death in the show's dramatic climax. In Fox's production, however, the 29 year-old-actress switches gears to play Maureen Johnson, the queer performance artist who unwittingly finds herself in something of a love triangle between her jilted ex Mark Cohen and her new girlfriend Joanne Jefferson. The role of Maureen was originated by Idina Menzel in the Broadway production and Menzel went on to reprise her role for the 2006 film adaptation

This is Hudgens' second crack at a Fox live musical event, too. She played Rizzo in the 2016 production of Grease: Live, so she's considered a pro of the genre alongside her Grease: Live castmate Jordan Fisher, who'll play Mark. Kiersey Clemons — best known for playing Diggy in 2015's Dope and Chase in Netflix's Easy — completes the love triangle as Joanne.

Instead of staging the production as a period piece, Fox plans to modernize a little bit, while preserving some of the show's iconic visual cues: the set made of scaffolding, Mark's blue-and-white striped scarf, and Angel's Santa outfit. Hudgens admits that she had her work cut out for in playing Maureen, saying in an interview with Billboard, "Vocally, emotionally, it's a tough part."

While Rent remains a cultural touchstone to millennials of a certain age — especially outcasts who identified with its romantic notions of a bohemian utopia while stuck roaming the halls of suburban high schools — the controversy surrounding the show and questions of Larson's plagiarism remain a cultural footnote. In the mid-'90s, prolific lesbian playwright, author, and activist Sarah Schulman alleged that Larson cribbed Rent's characters and plot lines from her 1984 novel People in Trouble.

Critics agreed that the resemblances were certainly there, but a lawsuit brought against the estate of Jonathan Larson after his death ultimately went nowhere. Schulman opted instead to write a book about the experience, titled Stagestruck: Theater, AIDS, and the Marketing of Gay America. Larson and his family consistently denied accusations of plagiarism.

In any case, it's clear that Rent remains important to many — and fans are excited to see another iteration of the classic musical.