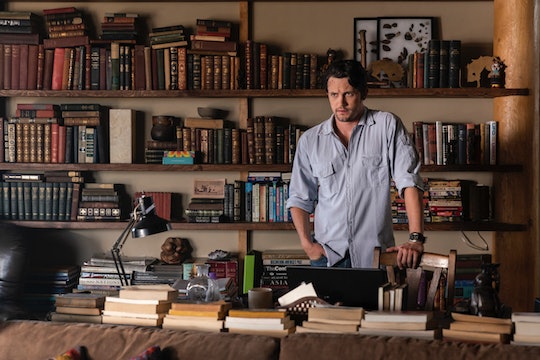 There’s a new leading man landing on screens everywhere: Max Evans, the Roswell, New Mexico cop with a secret. Yes, that’s right: If you haven’t heard, the CW has unearthed (hehe) yet another ‘90s-’00s teen drama and rebooted it. The characters are essentially the same, only now they’re adults (rather than adults playing teens), and the premise is pretty close. For anyone who had a crush on Jason Behr, you may be wondering who plays Max on Roswell, New Mexico this time around. I’ll just say this: you won’t be disappointed.

For those of you who didn’t partake, the original Roswell began airing exactly 20 years ago on what was then The WB, depicting a tourist-trap town that secretly houses a family of teenage-presenting aliens. The series aired for three seasons and helped launch the careers of Shiri Appleby (Unreal), Katherine Heigl (this was pre-Grey’s Anatomy), and Colin Hanks (back when he was just Tom Hanks’ son). Behr played the hearthrob role of Max, which has been taken over by Nathan Dean Parsons in the new adaptation.

Chances are, you recognize Parsons, but you’re not sure where from. Well, I’m here to help. Parsons, an Australian-born, American-raised 30-year-old, got his start where so many actors do: a soap opera. Parsons played Ethan Lovett on General Hospital for nearly three years, before leaving for the world of primetime television, where he has been consistently successful.

You might know Parsons from his recurring role as Godot on ABC Family’s short-lived Amy Sherman-Palladino series Bunheads. He also took over the role of James Kent on True Blood for the final season after Luke Grimes left the show. Or maybe you know him from his regular role as werewolf Jackson “Jack” Kenner on The Originals. He clearly made an impression in that last role — Roswell, New Mexico was created by Carina Adly Mackenzie, a writer for The Originals. The first episode was also directed by Julie Plec, creator of The Originals, which just finished its five-season run, so basically, it was a family affair.

Though he’s definitely about to blow up, this is one actor it may take some digging to learn more about. Parsons doesn’t share a whole lot of his personal life on social media — pretty much everything you see is about Roswell. In fact, he didn’t have an Instagram account until last year (!) and his second post showed Polaroids of himself and the Roswell, New Mexico cast, along with the show’s teaser hashtag “#UFOMG” (remind anyone else of Gossip Girl Season 2 promotional materials?). His Twitter is more of the same, and if you go back far enough, there’s even a time where the person posting wasn’t him (or he was speaking in the third person, which would be weirder to be honest). But hey, good for him! We can’t all be social-media obsessed.

If things go the way they did in the original series, expect Max to develop a romance with the main character, Liz Ortecho (she was Liz Parker in Roswell). Liz is a biomedical researcher who returns to her hometown and discovers the existence of aliens there, Max among them. The ensemble cast will definitely make or break this show, but with talented actors like Parsons, among many others you’ll likely recognize, there’s a good chance this is one reboot that will succeed.