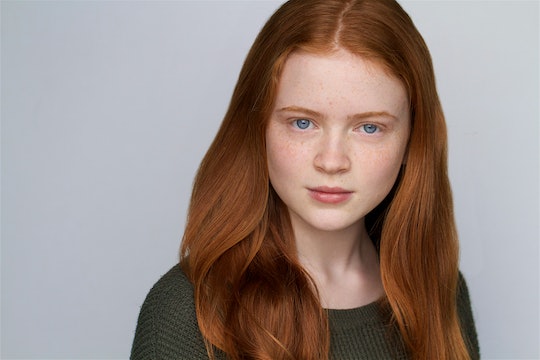 Stranger Things Season 1 featured an ensemble cast of all ages, but it was undoubtedly the children that stole viewers' hearts. The gang of Stephen King-like kids set out on a mission to rescue their friend, Will, from the Upside Down, and they wouldn't stop until they succeeded. In Stranger Things Season 2 the audience will see what else the kids will get themselves into — and there'll be some new fresh faces introduced as well. One is Max, a tomboy who enters the group. So who plays Max on Stranger Things? Sadie Sink joins the cast of esteemed child actors.

The Duffer brothers, who are the genius minds behind Stranger Things, wasted no time in developing the new season once it was renewed. In September of last year the Duffers started casting for Max, a "tough and confident" girl between 12 and 14 years old, whose "appearance, behavior and pursuits seem more typical of boys than of girls in this era." At the time, Eleven's involvement was "up in the air," so viewers didn't know if she would appear — or if Max was some kind of replacement for her. In addition to casting details, they revealed that the Stranger Things Season 2 premiere is titled "MadMax." Coincidence? I think not.

From the title, I assume that the premiere focuses on Max, and perhaps how she becomes friends with Mike, Dustin, Lucas, and Will. In September, Entertainment Weekly released some script pages for the "MadMax" episode, where Max is introduced — but she herself doesn't appear in the scene. Rather, the boys see that someone named "Mad Max" beat Dustin's high score for the arcade game Dig Dug. They ask an arcade worker, Keith, who Mad Max is, but he won't tell unless he gets a date with Nancy (Mike's sister). The boys assume that Max is a boy, but they're in for a rude awakening.

In a clip from Stranger Things Season 2 that was released earlier this month, Max is seen scaring the boys in a Michael Myers mask. From the way she acts, it seems that she's met them before. Variety described Max as a "tomboy with a complicated history and a suspicious streak." Judging by the clip and the fact that she beat the boys at Dig Dug, I can see that she's a tomboy — but I'm interested in her complicated history and suspicious streak. Stranger Things will also introduce Billy, Max's stepbrother who's described by Nerdist as the show's "new human villain" ...so maybe that says a little bit about the former.

As for Sadie Sink herself, Stranger Things 2 will not be her first acting gig by a long shot. The 15-year-old began her acting career in 2012 when she played Annie on Broadway. She was also on Broadway alongside Helen Mirren as Young Queen Elizabeth in The Audience. But not only is she already a Broadway vet at 14, she's also no stranger to Netflix: she was in an episode of Unbreakable Kimmy Schmidt.

Sink was a fan of Stranger Things before she was cast. She told WWD:

I’m usually the kind of person where if someone tells me 'Oh my god you have to watch this show, it’s amazing,' I kind of want to go against it and not watch it. But for Stranger Things, I couldn’t resist. I had to watch it.

Not only that, but she happens to be best friends with Millie Bobby Brown aka Eleven. I'm excited to see what Sink and Max will add to the show, and how both she and her stepbrother's character will add to the strange happening in Hawkins.