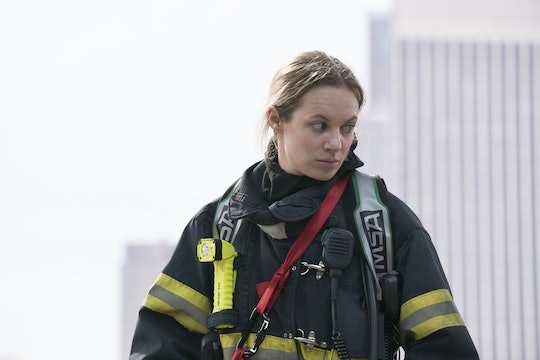 Maya Bishop Is Ready To Heat Things Up On 'Station 19'

Station 19 is finally here and with the new series comes a whole new set of characters. One of those new characters is Maya Bishop, a firefighter who works alongside and is good friends with main character Andy Herrera. But since Maya may look familiar, some of you may be wondering: who plays Maya on Station 19? Danielle Savre is stepping into a pivotal role.

The 29-year-old has been acting for almost 20 years now with roles on television and in film. She first got started on shows like One on One, The X-Files, Grounded for Life, and CSI: Crime Scene Investigation before getting a recurring role on Summerland as Callie. Following that she appeared on a number of other TV series and also had a part in Bring It On: All or Nothing as Brianna, working alongside Solange Knowles and Hayden Panettiere.

Savre then starred in the short-lived MTV music drama, Kaya, as the titular character before getting a recurring role on Heroes as Jackie Wilcox, where she worked alongside Panettiere yet again. Following Heroes, Savre found herself on Hollywood Heights as Lia and then appeared in a number of films, including Adulterers and 48 Hours to Live.

In 2016, she nabbed the starring role in Tyler Perry's drama series Too Close to Home as Anna. Unfortunately, the series was canceled after two seasons. However, Savre bounced back and landed a big role in AwesomenessTV's series, T@gged, which, if you've never heard of it, is perfect for fans of Pretty Little Liars. Savre played one of the teachers, Ms. Dawson. Now she finds herself joining the cast of Station 19 and you can also see her on the big screen when she stars in the film Deep Blue Sea 2, which comes out this July.

As for what Savre does offscreen, the actress appears to be pretty private when it comes to her personal life. However, it does appear that she's in a relationship. On Valentine's Day she shared a picture to her Instagram with her arms wrapped around a man named Andrew Contis, and the caption was simply a heart emoji. Contis' Instagram is private so there's not much known about him.

Looking at her Instagram, it appears Savre also enjoys going snowboarding at Lake Tahoe in California but also likes hanging out in warmer climates by the water as well as hanging out with animals. She even has a photo of herself spending some quality time with an elephant, which is absolutely adorable.

Additionally, Savre has a close relationship with her older sister, Stephanie, who is actually a firefighter in Los Angeles. Savre revealed on the Olympic & Bundy podcast that she drew a lot of her inspiration for her character of Maya from her sister and loves getting information from her sister and the firefighter advisors that are on set. "I love racking their brains, and even stories that they didn't think would be important, for me as an actor, I'm like, 'No tell me these things!'" she said.

However, there were some facets of Maya's character Savre couldn't get from her sister. Maya isn't just a firefighter, she's also a former Olympic athlete. According to PopSugar, Maya is "driven, ambitious, hard-working and competitive, even with her closest friends." It sounds like Maya will be a multifaceted and very interesting character that I, for one, can't wait to meet.

You can learn more about Maya when Station 19 premieres on Thursday, March 22 at 9 p.m. EST on ABC.