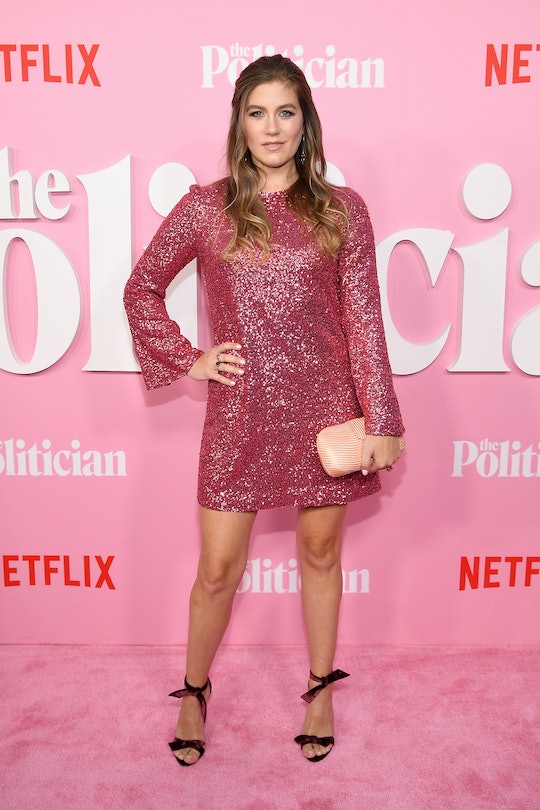 Ryan Murphy's Netflix series The Politician reunites the creative team behind Glee and the comedy has some distinctly Glee-esque elements, like an all-star adult cast paired with fresh-faced newcomers playing its high school students. Among the new talent is Laura Dreyfuss, who plays McAfee on The Politician, one of a trio of campaign staffers surrounding lead character Payton Hobart (Ben Platt). Payton is running for student body president, but he has aspirations of reaching the Oval Office someday.

Dreyfuss already boasts ties to series lead and executive producer Platt — the two played opposite each other in the Broadway musical Dear Evan Hansen, which was arguably responsible for making Platt a household name. Dreyfuss originated the role of Zoe Murphy, younger sister to Connor Murphy, whom Evan Hansen has a crush on. But despite their history of playing romantic interests, Dreyfuss and Platt stay strictly platonic on The Politician. Payton's girlfriend Alice Charles is played instead by newcomer Julia Schlaepfer. Dreyfuss' character McAfee is one of Payton's two best friends, alongside James, played by Theo Germaine. The pair is something of a public relations dream team, spotting social media gaffes from a mile away and shielding Payton from any potential fallout.

Dreyfuss and Murphy, as it turns out, also go way back. She played Madison McCarthy on the final season of Glee, better known as one of the two "Incest Twins." Madison and her twin brother Mason are William McKinley High cheerleaders who follow in Quinn, Brittany, and Santana's footsteps by joining the New Directions in their post-championship year. Some of Dreyfuss' memorable performances on the show include solos in "All Out Of Love," "Come Sail Away," and "Chandelier."

Dreyfuss earned a BFA in Musical Theater from Boston Conservatory and her first big break was as a swing cast member in the 2010 Broadway revival of Hair. She went on to replace an original cast member in the Broadway musical adaptation of Once in 2012, and eventually made her way to Dear Evan Hansen in 2015. Aside from Glee, Dreyfuss also appeared in two episodes of The Marvelous Mrs. Maisel Season 2, playing Deecy, one of the regulars at the family's Catskills resort.

Dreyfuss was raised in New Jersey and comes from a performing arts family, according to a profile in Interview Magazine. Though her parents are a doctor and a nonprofit worker, her older sister joined the Broadway cast of Mamma Mia! when Dreyfus was 12 years old.

“I honestly can’t remember a time where I wasn’t performing — bouncing around my house, trying to entertain anyone who would listen,” she told Interview Magazine. “I have never not been a natural-born entertainer for my family.”

Apart from TV and musical theater, Dreyfuss also has some mainstream music aspirations; she dropped a single called "Be Great" under the stage name Loladre in 2018. So whether you're a Ryan Murphy superfan, a musical theater nerd, or a newbie totally unfamiliar with Dreyfuss, she's definitely poised to make a splash with a major Netflix title under her belt.

The Politician is currently streaming on Netflix.