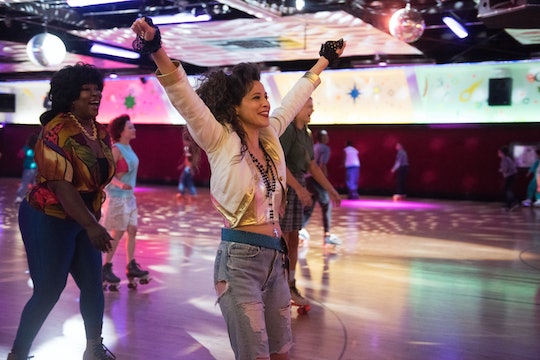 Netflix is bringing you a lot of new shows to binge this summer. Its latest project is GLOW, which is inspired by the popular '80s show of the same name. The new series follow Ruth (played by Alison Brie), an out-of-work actress who tries to make one last claim to fame by auditioning for a new TV series called Gorgeous Ladies of Wrestling, or GLOW for short. Along with Ruth, the show follows a diverse group of women also trying to make a name for themselves and discover fame and success along the way. One of those women is Melrose, but who plays Melrose on GLOW? Jackie Tohn snagged the unforgettable role.

Though this is Tohn's first major role in a television series, fans will probably still recognize her from some of her previous works on both TV and film. Most recently, you may have seen Tohn in CHIPS, The Good Place, Sisters, Jem and the Holograms, and Castle. She's also appeared in House of Lies, Rules of Engagement, For a Green Card, CSI: NY, The Closer, It's Always Sunny in Philadelphia, and Veronica Mars. After GLOW, fans can next see Tohn in the biographical film A Futile & Stupid Gesture about Doug Kenney.

In GLOW, Tohn's character Melrose is described as a Hollywood party girl, and that's all that's known about her thus far. Obviously, she'll be one of the Gorgeous Ladies of Wrestling, but besides that the cast and creators have been pretty secretive about divulging anything else about the storyline and the characters. Starring alongside Tohn and Brie are Ellen Wong, Britt Baron, Kimmy Gatewood, Betty Gilpin, Rebekka Johnson, Laurie Francene Kinzer, Sunita Mani, Sydelle Noel, Gayle Rankin, and Kia Stevens.

The show, which is brought to you by Jenji Kohan (aka the person responsible for gifting the world with another Netflix gem, Orange Is the New Black), stars a lot of new faces — but if GLOW is as successful as OITNB, you can expect to see these stars become household names in no time, so you might as well get to know them now.

Similar to OITNB, GLOW is all about interesting, complex women and seems to be filled with female empowerment and diversity. So even though the show takes place in the '80s, the themes are definitely universal. Plus, who doesn't love some '80s nostalgia?

You can check out GLOW when it begins streaming on Netflix on Friday, June 23.

More Like This
10 Super Bowl Party Games To Play While You Watch The Main Event
Three Adorable Wombats Learn To Solve Problems In PBS Kids’ New Show
Jinger Duggar Was Taught Motherhood Defined Her — & Then She Broke Free
When Does 'Yellowstone' Season 5 Come To Peacock? Not Soon Enough
What Parents Are Talking About — Delivered Straight To Your Inbox