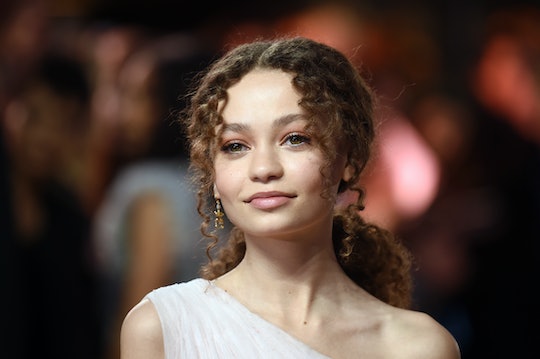 A live-action remake of one of Disney’s most beloved films is coming to theaters on March 29 and the trailers for Dumbo look totally different from the OG 1941 version, but also totally incredible. There's a talented cast, of course, but there's also at least one relatively new face you may not have seen before. So if you're wondering who plays Milly in the new Dumbo, here's everything you need to know about 14-year-old Nico Parker.

The little girl who learns of the baby elephant’s special gift is a new face, but one that bears a strong resemblance to her mom — the one and only Thandie Newton, according to Page Six. Dumbo is Parker’s first feature film — though her IMDb page also lists appearances as herself on The Late Show With Stephen Colbert and Disney Parks Magical Christmas Day Parade, so she’s had some exposure to cameras before.

In fact, she’s likely been around cameras all her life, as the daughter of a well-known actress and director Ol Parker, according to the Evening Standard. Despite having experts so close by, Parker told the The Hollywood Reporter that she chose to go it alone when it came to acting in her feature debut though.

“When it came to acting, I didn’t really want advice,” she told the The Hollywood Reporter.

That might have been a smart choice, since too many cooks in the kitchen can definitely spoil the meal. And Parker was already having to follow the instructions of one Hollywood heavyweight, Tim Burton, who directed the new Dumbo, according to USA Today. Burton’s remake of the classic tale puts a spin on things that broadens the story from its genesis, but hopefully still holds true to the essence. For one thing, there are more people.

In this version, there are real-life actors alongside a CGI Dumbo, according to the Daily Mail, and the list is pretty impressive. Colin Farrell plays Holt Farrier, a veteran back from the war who seeks out a job at the circus. Danny DeVito is Max Medici, the circus owner who hires Farrell and has big plans for Dumbo. Michael Keaton plays V.A. Vandemere, a businessman with a not-entirely-honorable vision of how to capitalize on the circus oddity.

And Parker plays Holt’s daughter Milly, alongside Finley Hobbins as her brother, Joe. The kids are the ones who discover that Dumbo can fly, based on a moment in the trailer that surprises them all.

Burton spoke to Entertainment Tonight about his cast and their experience acting alongside a stand-in for Dumbo, who was digitally added into the movie during post-production. “There’s all these amazing actors, and the main character’s not there,” he said.

Parker and Hobbins, also acting in his first on-camera role, seem to pull the feat off well and provide plenty of sweet moments in the trailer that make me believe they will be the heart of the movie. Still, can this reimagining pull off the emotional journey that was at the heart of Dumbo when audiences first fell in love decades ago? Check it out in theaters on March 29.