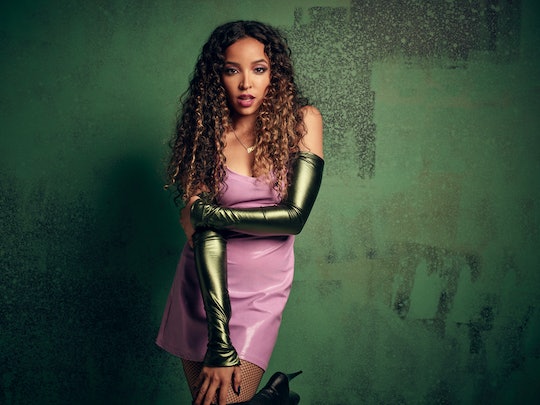 This 'Rent: Live' Actress Was A Season 27 'DWTS' Contestant

Broadway fans have been counting down the days until Fox's upcoming adaptation of Rent: Live. I mean, it is a downright classic and plus — that cast. So many talents, so little time. The cast includes powerhouses like Vanessa Hudgens as Maureen, and Jordan Fisher as Mark, so maybe you're wondering who plays Mimi in Rent: Live. Chances are, you've probably already already noticed the actress's three-leveled talents because they're that sharp.

The role of Mimi Marquéz will be played by Tinashe, who is a pop singer, dancer, actress, and probably more, to be honest. Mimi — originated by Daphne Rubin-Vega on Broadway and later adapted via the 2005 film by Rosario Dawson — is famously known as the character struggling with addiction who snags recovering addict Roger's attention. She's an HIV-positive erotic dancer with a rich ex-husband (played by R&B singer, Mario). He's looking to gentrify the place he previously lived but she's merely trying to survive. If Tinashe's name sounds familiar, you may have caught her on Season 27 of Dancing With the Stars where she made it to the fourth week before a baffling elimination. She definitely had the talent on a show that highlights dancing skills — and the girl can dance — but it wasn't enough to get her to the finals. Maybe playing Mimi will give her the chance to showcase a little more of all her talents combined: acting, singing, and dancing. Basically, she's the epitome of a triple threat so even the most particular Rent fans should be satisfied with this casting choice.

Speaking of talent, Tinashe's been at the entertainment thing for years. Way back in '07, she was part of the girl band, The Stunners, before veering off on a musical path of her own. Her 2014 debut song, "2 On," gave her a spot at the top of the charts and her follow-up album, Joyride, hit the airwaves in 2018. Tinashe's had one hell of a ride in nearly every corner of showbiz. In Rent: Live, she'll have the opportunity to belt out some of the most memorable songs with Roger (Brennin Hunt) such as "Light My Candle" and "Another Day," and more. If you're wondering about the biggest song, "Out Tonight," yes — she'll tackle that one, too, and I have no doubt Tinashe will kill it.

The original Broadway play ran for 12 years after its debut in 1996 and became one of the most critically-acclaimed and award-winning plays of all-time. It's a cultural phenomenon that's just as important today than when it first took to the stage, spreading message of "joy and hope in the face of fear." In fact, the 20th anniversary tour website said, "Jonathan Larson’s Rent continues to speak loudly and defiantly to audiences across generations and all over the world." The summary added the play is about, "A re-imagining of Puccini’s La Bohème," that "follows an unforgettable year in the lives of seven artists struggling to follow their dreams without selling out."

It's clear Tinashe was born for a role like Mimi. With all that talent, how could she not be? And anyway, it doesn't matter if you're a decades-long fan of Rent or not. The live TV version will hit all the important notes as the Broadway version so you can hop onto the bandwagon ASAP.