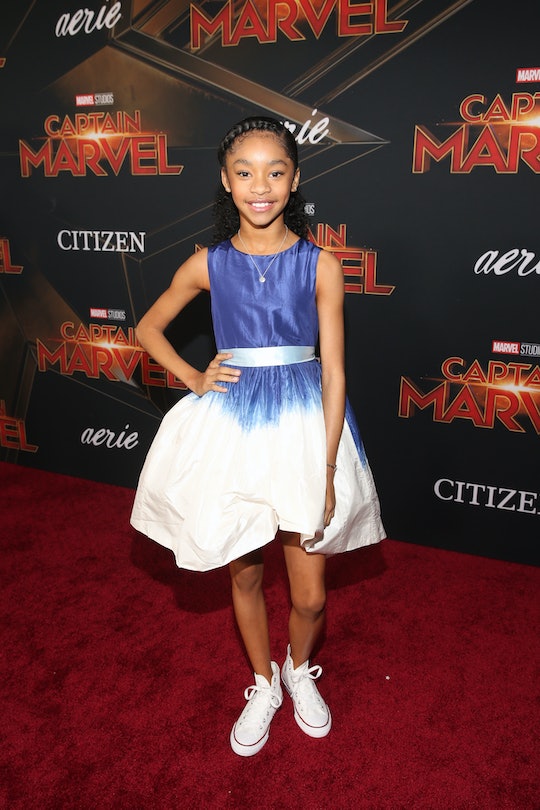 When people head to the theaters this weekend to see Captain Marvel, they're going to marvel over the strength of Captain Marvel herself, played by Brie Larson, who is such a scene stealer. But there is another, smaller, character who steals the show — Monica Rambeau. And after watching the movie, people will definitely want to know who plays Monica Rambeau in Captain Marvel. Needless to say, people will definitely remember actress Akira Akbar's name after seeing the film.

Akbar's role in the film might be small, but it's definitely essential to Captain Marvel as a whole. In the film, Akbar plays Monica Rambeau, the 11-year-old daughter of Maria Lambeau — Carol Danvers' (also known as Captain Marvel) long lost best friend, Air Force Pilot, and single mother (played by Lashana Lynch). Akbar's character, Maria, is the "highlight of the film," according to Essence, as the quick witted, intelligent, confident girl who gets the honor of choosing the colors on Danver's suit as Captain Marvel.

Because Monica is such an important character to Danvers' transformation into Captain Marvel — and because Akbar can hold her own with Larson, an Academy Award Winning actress, people are probably dying to know more about Akbar.

And chances are, people have probably seen her on their TV screens already, before this movie premiered.

Akbar is an actress, model, and dancer who has had small but memorable appearances on Grey's Anatomy in 2017 and Criminal Minds in 2015, before landing the role of Young Beth on NBC's This Is Us — everyone's favorite heart wrenching TV drama.

And in spite of being so young, Akbar told Shadow and Act that acting is her passion — albeit a newly discovered passion. Akbar said:

I began modeling first, and my mom saw how I loved to be in character and make skits and do videos with my sister, so she put me into acting. I've just loved it ever since. I like working with people and being different characters — even if they're not me. I can just go home and be myself, but once I'm on set, I'm in action.

And when Akbar joined the set of Captain Marvel, she told Shadow and Act that she fit right in. Akbar said:

I had a really great bond with Brie and Lashana. Brie gave me the nickname, "sis." Lashana Lynch and I, we spent time together on and off set. She took me to her favorite chicken spot in Louisiana even though she's a vegetarian. I really had fun every day.

And that's great that Akbar felt right at home on set because she could be spending more time on movie sets in the future, especially since her performance is getting rave reviews.

Not to mention, Akbar's character, Monica, in Captain Marvel is one that is supposed to stick around in the film. Monica could very well appear in the next Avengers film, Avengers: End Game, especially since she became Captain Marvel in the comic book.

But whether Akbar stays with the franchise or ventures out to new TV or movie roles, it's very likely that this is not the last time that people will see or hear about Akbar.