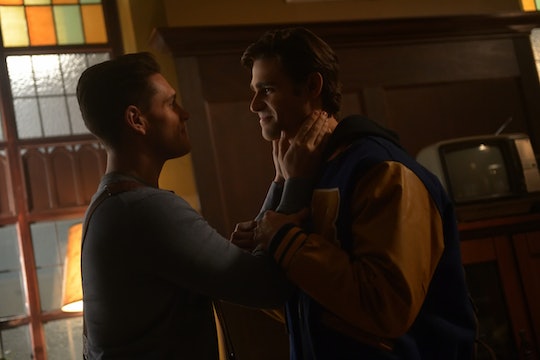 Moose May Be Faced With A Tough Decision On 'Riverdale'

Aside from its mysterious serial killers and over-the-top high school drama, Riverdale is known for its intense romantic relationships. Varchie and Bughead shippers have been on board since Season 1, but now fans are hoping to see more of Kevin and Moose’s blossoming relationship. With all the screen time “Koose” is getting, fans naturally want to know more about the actors playing them. So, who plays Moose on Riverdale?

Cody Kearsley plays Moose Mason on Riverdale, and this is one of the Canadian actor’s most notable roles to date. He was previously featured in the 2017 Power Rangers movie as Hawkeye, and was also cast in a recurring role on the Canadian web series, Spiral. Kearsley is set to appear alongside Matthew Broderick in a new Netflix dramedy series titled Daybreak, which should premiere sometime later this year.

On Riverdale, Kearsley plays Moose, a varsity football player at Riverdale High School who is secretly attracted to men. Moose has been flirting with Kevin since Season 1, which ended with a few romantic encounters. But since Season 2, their relationship has blossomed, and they now seem to have real feelings for each other. Moose’s longtime girlfriend, Midge, was killed by the Black Hood at the end of Season 2, and when she died, Moose found solace and comfort with Kevin. This tragedy brought the two closer on an emotional level, and fans have been going gaga over their ship ever since.

But coming out of the closet is just as hard in Riverdale as it is in real life, which is why Moose is hesitant about making it public. He is scared that his father, Major Mason, won’t accept him if he comes out, so he tries keeping his sexual orientation under wraps. But now that Major Mason is the new head of ROTC at the high school, and has forced his son to sign up, Moose is extra vigilant about keeping his relationship with Kevin a secret.

However, in a super romantic gesture, Kevin joins the ROTC to be closer to Moose, and the two use their time together to sneak in make out sessions in and around the school. And when the school gets infested with fizzle rocks and mysterious mass seizures, Kevin and Moose team up and use their combined ROTC authority to keep physical contact amongst students to a minimum.

But, aside from their ROTC power trip and secret trysts, it looks like Moose and Kevin might need to take their relationship to the next level. In an interview with Insider, Casey Cott — the actor who plays Kevin — revealed that Moose may be faced with the challenging situation of coming out of the closet. "Kevin is going to have to eventually challenge Moose and say, 'Listen, what we've got going is great, but I want to be out and together and not be this closeted thing,'" Cott told the outlet. "Moose will have to make a decision eventually.”

Hopefully, Moose and Kevin will find a way to make things work as Season 3 progresses, and I truly hope that their friends and families come on board to support this beautiful relationship.