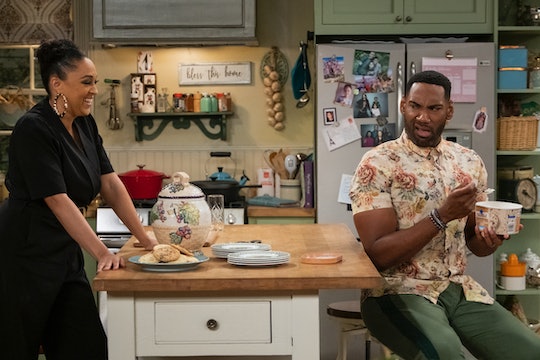 Netflix’s new sitcom, Family Reunion, is centered around the McKellans, a Seattle family who moves to Georgia to be closer to their relatives. The show features a cast of well-known stars, including TV veterans Loretta Devine and Tia Mowry. But there’s one cast member who may stand out as a familiar face that you can’t quite place. So who plays Moz on Family Reunion, and where have you seen him before?

Anthony Alabi has been on TV for years, but before that, he was a successful pro-football player. According to his official NFL profile, Alabi started out at Texas Christian College, went on to play for the Miami Dolphins from 2005 to 2007, and was then picked up by the Kansas City Chiefs in 2008. After leaving the NFL, Alabi started his acting career, appearing in shows like Bosch, Modern Family, and Insecure. His most recent recurring role was as Coach Spitz on the Disney Channel series, Raven’s Home.

In an interview with LA Parent, Alabi revealed that he grew up in San Antonio, Texas with his Nigerian father and Puerto Rican mother. He was drawn to acting and film as a child, and when he was given a choice to continue football or pursue an acting career, he chose the latter. After landing smaller parts on various series for the last decade, his lead role on Family Reunion came as welcome news. “I had to pull over my car because I started shaking,” Alabi said. “When I told my wife, she and I started to cry. We cried for two days. My wife asked, `Was it worth it?’ and I said, ‘Tenfold. It’s better than I can imagine.’”

When talking to Meaww, Alabi described the show as a throwback to ‘90s sitcoms like The Fresh Prince of Bel Air and Family Matters that is sure to make fans think and smile. “You're going to laugh a whole lot because I think our writers' room — which was the first all-black writers' room — they did a phenomenal job injecting comedy and creating a nice balance between that and a really deep current; moments that deal with topics that are on theme, that are right on the pulse of our culture right now and exploring those and making sure that everybody had a unique point of view,” he told the outlet.

“But at the same time they make you laugh about it and in the end, without being silly or goofy, they made it funny. And so you're going to get that combination. I think at the end of it you're going to kind of exhale and just go ‘Woo! That was awesome,’ and wait for the next episode.”

With hard work and patience, Alabi landed a great role on Family Reunion, and you can watch him and his hilarious McKellan hijinks on the first season, streaming now on Netflix.