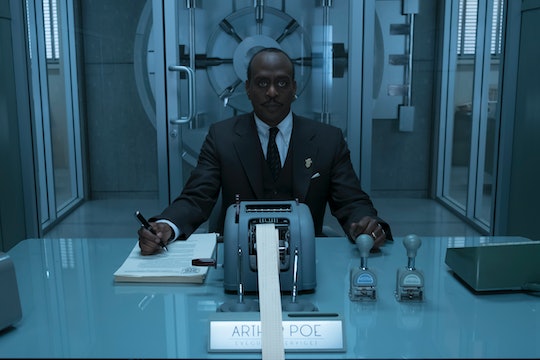 Mr. Poe Is An Important Figure On 'ASOUE'

Netflix's new adaptation of Lemony Snicket's A Series of Unfortunate Events is here and fans can't wait to see it. The trailer alone looks amazing and after the movie version of the books left so many fans sorely disappointed, most are excited to see how this new series works out. Neil Patrick Harris has stepped into the role as the very strange villain Count Olaf, and Patrick Warburton will play the author and narrator, Lemony Snicket. The cast is filled with amazing and mysterious characters, including Mr. Poe, the banker in charge of the Baudelaire siblings' affairs. So who plays Mr. Poe on Netflix's A Series of Unfortunate Events? Actor K. Todd Freeman steps into the role and you'll probably recognize him from some of his past projects.

Freeman has been working in films and television since the '90s and has played various different roles over the years. He's had recurring roles in the shows Dangerous Minds, NYPD Blue, and Buffy the Vampire Slayer. Freeman also had a brief role in Netflix's other new show, The OA. Over the years Freeman has also appeared in films, including The Dark Knight, Anesthesia, The Lucky Ones, and House Arrest. Additionally, he can be found in the 2014 film version of Teenage Mutant Ninja Turtles, which his Series of Unfortunate Events costar, Malina Weissman, also appeared in. Small world, isn't it?

In the novels, the Baudelaire children briefly live with Freeman's character, Mr. Poe, before they are sent to live with their distant relative Count Olaf, who wants to steal their family's fortune and claim it as his own. Like most of the other adults in the novels, Mr. Poe — though he is kind a very kind man with good intentions — he proves to be no help to the Baudelaire children because he doesn't believe their claims about Count Olaf's many evil schemes.

It's unclear just how much we'll see of this character in the series, but he will appear in at least two episodes of Season 1, and since he's handling the Baudelaire's money, one would expect he'll continue to appear throughout the course of the story. Mr. Poe also has two sons, Edgar and Albert (Snicket's little shout out to Edgar Allen Poe, of course), who will also appear in the show as well.

A Series of Unfortunate Events is available for streaming on Netflix beginning on Jan. 13. Don't miss it!