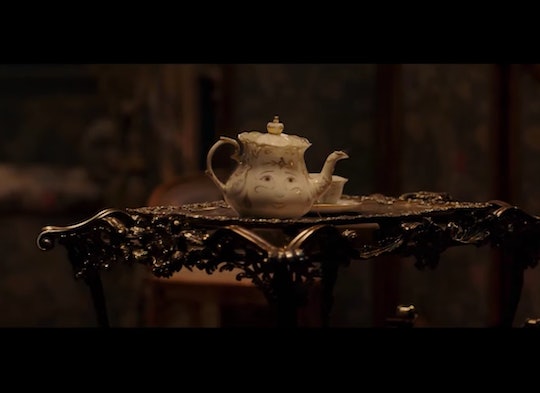 Who Plays Mrs. Potts In ‘Beauty And The Beast’?

Live-action remakes of animated films have been a big trend as of late, but there's one highly-anticipated remake that millennial parents seems particularly excited about introducing to their kids (not to mention enjoying themselves). The live-action update of Beauty and the Beast hits theaters Friday, March 17, and boasts a star-packed cast, including Emma Watson as Belle, Luke Evans as Gaston, Sir Ian McKellen as Cogsworth, and Dan Stevens (of Downton Abbey fame) as the Beast. Who plays Mrs. Potts in Beauty and the Beast? While it's honestly pretty difficult to imagine anyone other than Angela Lansbury lending her voice to the beloved teapot, everything that's been released so far suggests that Emma Thompson will have no trouble at all living up to the high expectations shared by fans around the world.

Thompson was announced as an addition to the Beauty and the Beast cast in 2015, according to Vanity Fair, and it was certainly a welcome announcement. After all, Thompson had pretty much already endeared herself forever in the hearts of millennials thanks to her roles in Love Actually and in three of the Harry Potter films — and since she won't actually be making an appearance in the also-highly-anticipated Love Actually sequel, according to The Guardian (sob!), having her be part of such a nostalgic film feels totally appropriate. And considering that having Thompson, Watson and McKellen back together on film will also feel like a bit of a mini Harry Potter reunion? Well it's fantastic news all around.

There's one aspect of Thompson's role as Mrs. Potts that has fans particularly excited: the fact that she'll also be singing the film's beloved theme song while Belle and the Beast dance together and the various personified household items watch on approvingly. As with the original film, the theme song has also been recorded separately as a duet with an accompanying music video (sung by Ariana Grande and John Legend in this version, while Celine Dion and Peabo Bryson did the honors in 1991), but it looks as though Thompson's version will also be making the cut on the soundtrack, and people are totally psyched about it.

If you're a Beauty and the Beast purist though, Thompson's contribution may have been tainted a little after Lansbury revealed in an interview with Entertainment Weekly in Nov. 2016 that she wasn't exactly thrilled with the idea of a remake. The 91-year-old Murder She Wrote actress appeared at a special 25th anniversary screening of the original film in New York City earlier that year — and even performed the famous song live! — but admitted that she was "a bit taken aback" by the news that it a new version was in the works. Lansbury said,

I don’t quite know why they’re doing it. I can’t understand what they’re going to do with it that will be better than what we’ve already done. And how they’re doing it live — it may turn out to be very entertaining and wonderful. It won’t be like the cartoon that we did, but it’s a good story — it’s one of the famous fairy stories that is known worldwide by children. Therefore, why not? I don’t blame them for doing it. But, I’m sorry, they’re not really on our territory. We did it as cartoon characters, and that is quite different from live actors.

The one thing Lansbury said she wasn't bothered about though? That it was Thompson who was taking her place as Mrs. Potts. Lansbury called Thompson "a very good friend of mine," and that definitely appears to be true. The two worked together in 2005's Nanny McPhee (which Thompson actually wrote), and in 2006, Thompson interviewed Lansbury for The Legendary Angela Lansbury, a BBC Radio 2 documentary special about Lansbury's 72-year acting career, according to The Express.

But even their close relationship didn't prevent Thompson from feeling intimidated to take on Lansbury's famous role. According to The Belfast Telegraph, Thompson said in February that she began to panic after agreeing to voice Mrs. Potts, and that she went back to Lansbury to ask for her advice:

You have that reaction but then you think 'I have to sing that song, that iconic song that Angela Lansbury made so famous and she's really a singer' so actually because I know her I was lucky enough to be able to ring her up and say 'what am i going to do?'

Luckily for Thompson though, Lansbury was nothing but supportive. Thompson said,

I have done lots of her parts, I had just done Sweeney Todd and I had rung her about that and of course she was in Nanny McPhee with me and I love her to pieces and she was brilliant and she said 'Darling it's the song, it's not about you. Anyone can sing it, it's a great song, go and sing it with all your heart for a new generation and enjoy it', and she just took all the pressure off and told me to go for it, she's a great woman.

For anyone who grew up with Beauty and the Beast, there's no doubt that it's super exciting that the remake is just around the corner, and honestly, the cast seems totally stellar. So even if Angela Lansbury might still always be Mrs. Potts in your childhood heart, it seems a pretty safe bet to assume that Emma Thompson is going to do an amazing job in the updated version.