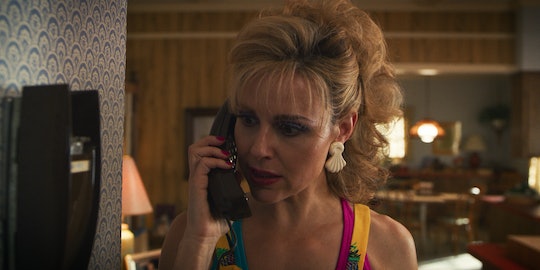 Though Stranger Things primarily focuses on the kids of Hawkins fighting the forces of alternate dimension evil, none of it would be possible without the total lack of adult supervision. Mike and Nancy's mom Mrs. Wheeler may not be keeping a close eye on her kids, but she is providing plenty of meme fodder with her 1980s coifs and bubble baths. But finding out who plays Mrs. Wheeler on Stranger Things reveals that there's a very talented actress under all that hairspray. Though it does take some major skills to make blue eyeshadow like that actually work.

Cara Buono plays Hawkins' most quintessentially '80s mom. In the first two seasons, she was there to call her kids down for dinner, lug around Mike and Nancy's little sister, and enjoy romance novels by candlelight. But Buono had a lengthy list of credits to her name before she ever stepped foot in Hawkins. Mad Men fans might remember her as the under-appreciated Dr. Faye Miller, who provided Don Draper with a psychological breakthrough only to be left in the dust soon afterwards. But that was just one of many TV appearances by Buono. She has also appeared in episodes of Law & Order, The Sopranos, Elementary, Person of Interest, and The Romanoffs, among others.

Buono has taken part in quite a few movies, too, both on TV and on the big screen. She recently starred in a TV remake of The Bad Seed, but has been in Paper Towns, A Good Marriage, and The Discoverers as well. Buono has been working steadily in film and TV since the early 90s, so it's almost a guarantee that you've seen her in something before she ever got her flirt on with a high school bully on Stranger Things. (Note to Mrs. Wheeler: please don't.)

According to The New York Times, Buono has been acting since she was a kid. She appeared in Harvey Fierstein's play Spookhouse when she was just 12 years old, and still refers to the stage as her first love. In a 2018 interview with Los Angeles Confidential, she explained that she was cast in a play before she had ever seen one, because she didn't have the opportunity growing up. She felt there was a "freedom and sense of risk" involved in acting in front of a live audience, but she also loved the challenge of TV. "I'm drawn to a compelling story and great writing so I will work in whatever medium where those are the strongest," Buono said.

She was drawn to Stranger Things immediately, per WTOP. She was delighted to be offered the role of Mrs. Karen Wheeler, because she knew she wanted to be part of the show as soon as she first read the script. She went on to infuse the character with her own unique touches — like making sure Mrs. Wheeler always had a glass of wine in her hand to explain why she never noticed what the kids were up to — and definitely made an impact on the audience.

Mrs. Wheeler was last seen getting flustered by Billy's magnificent but very evil mullet. Hopefully when Season 3 of Stranger Things premieres on Netflix on Jul. 4, she'll manage to resist his malevolent allure.