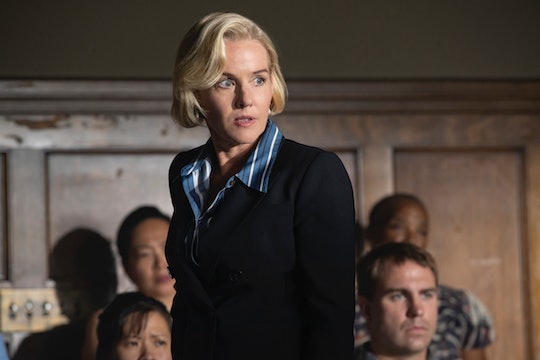 When Riverdale returns for its third season, fans are hoping to see their favorite hunk Archie Andrews pull himself out of the legal bind he was thrust into last season. But with the introduction of his prosecuting attorney, Ms. Wright, it looks like Archiekins will have to put up a big fight. So who plays Ms. Wright on Riverdale? Penelope Ann Miller is joining the cast as Archie’s new courtroom foe.

Miller is best known for her role as Gail in Carlito's Way, which earned her a Golden Globe nomination, as well as her performance in the Oscar-winning film, The Artist. Her most recent television roles were in Mistresses and American Crime, for which she earned a Satellite Award for Best Ensemble alongside Felicity Huffman and Regina King. Her addition to the Riverdale cast was first announced at San Diego Comic Con this summer, and according to The Hollywood Reporter, the producers also revealed that Jughead’s mom and sister, Jellybean would also be introduced later in the season.

Fans know that Archie was framed for the murder of a Shadow Lake resident named Cassidy Bullock, but it seems that Ms. Wright is hell bent on proving that he did it. According to her character bio, Ms. Wright is the savvy and eloquent prosecuting attorney handling Archie’s case, and “with a conviction in mind, she will weave together disparate moments of Archie’s young life to portray him as a dangerous, violent sociopath who is capable of committing a heinous crime.”

It's pretty obvious that Hiram Lodge framed Archie for the murder, so it is going to be gut wrenching to watch him prosecuted for a crime he didn't commit. So who is the guy Archie is charged with killing? If you jog your memory back to Episode 14 of Season 2, you’ll remember that Cassidy was the young shop owner in Shadow Lake that flirted with Veronica and Betty. While staying at the cabin lodge in Shadow Lake, Archie and the gang are confronted by a group of hooded goons who eventually fled when Veronica pushed her bedroom’s panic button. But when Archie chased after them, he saw that one of the hooded thugs was Cassidy. Archie then fled from the scene as well, but a gunshot was heard behind him, and soon after Cassidy was found dead.

Fans know that Archie didn’t kill Cassidy, but after he threatened Hiram in the finale, he may have put a target on his back. In the dramatic ending of Season 2, as Archie waited in the gym to be inaugurated as Student Council president, Hiram’s henchman, Sheriff Minetta comes in to arrest Archie for murder. All signs point to Hiram’s hit-man Andre as being the killer, but now that Andre and Cassidy are both dead, it will be easy for Hiram to pin the murder on Archie.

While Ms. Wright will be on the opposite side of the courtroom during Archie’s trial, it is still unclear what her intentions and motivations are. If she is an honorable prosecutor, she’ll try her best to look at the facts and evidence when prosecuting Archie’s case. However, there’s always a possibility that she is part of Hiram’s network of corrupt criminals, and he may be using her to convict Archie, so that he’s out of his hair for good.

There is also a chance that Veronica finds out about her dad’s scheme, and she could also end up as a witness in Archie’s trial. But, of course, this is all just speculation, and fans like myself will just have to wait and watch all the drama unfold next season. Luckily, the wait is almost over.