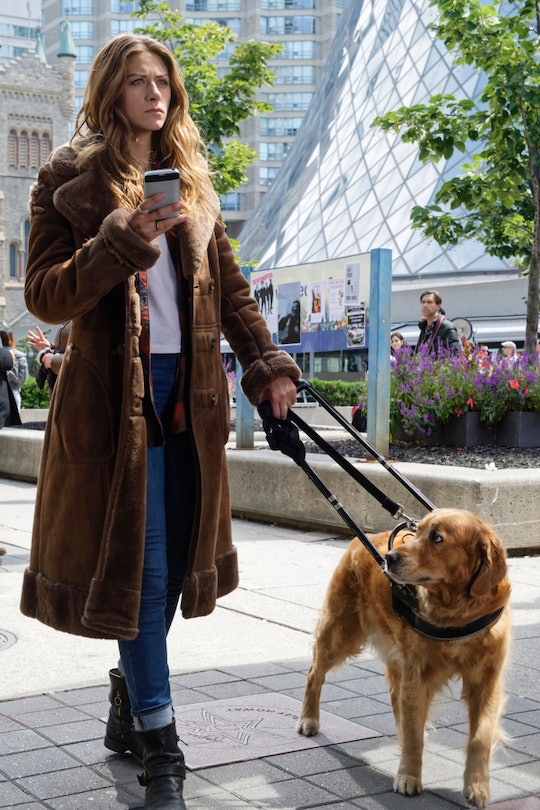 If you've been thirsty for your next CW drama obsession, buckle up, buttercups. In the Dark is set to center on a complex protagonist, Murphy, as the sole witness to a murder — who happens to also be blind. With such a multi-dimensional character, you'll likely wonder who plays Murphy on In the Dark while watching. Chances are good you've seen this actress on other shows, but let me formally introduce you.

Perry Mattfeld was featured in Sports Illustrated as The World Famous USC Song Girls, but will now be known as a scene-stealer on the upcoming drama, In the Dark, so don't forget her name. Mattfeld had a recurring role as Mel on Shameless, alongside Emmy Rossum and William H. Macy, but her list of acting credits goes back to '06 when she appeared on The Megan Mullally Show as "American Girl." If you have kids (or tweens) as I do, Mattfeld may look familiar as she was FrankenGirl on the Disney Channels's Wizards of Waverly Place back in '09. Those credits aside, Mattfeld's been busy starring in various shorts and TV shows, but mostly in minor roles. It looks as though Murphy will be Mattfeld's first starring role.

If you want to know more about Mattfeld's life off the screen, her Instagram page covers it all. Whether it's gorgeous pics surrounded by lush aesthetics, or candid shots with friends, it's clear there are many sides to this talented gal. The best photos, though, are the ones with puppies. Because, puppies.

Real life aside, In the Dark looks to be a real twister. Mattfeld's character, Murphy, is a flawed woman who witnesses the murder of her friend, Tyson. But because of Murphy's blindness, police don't take her seriously — which only makes Murphy's need to justice that much greater. She and trusty dog, Pretzel, set off to find the killers. Don't worry, law enforcement officials — they've got this. Murder mystery aside, Murphy leads a pretty interesting life. She's a drinker with a messy dating life (aka love and closeness are tough for this character), who loathes her job at Breaking Blind, a guide-dog school that her parents own.

Murphy's BFF and roommate, Jess (played by Brooke Markham), means well, but just like Murphy's parents, she's overprotective of Murphy. As for others in the show, there's Darnell (played by Keston John) — Tyson's cousin who at first dismisses Murphy. After doing his own investigation he realizes Murphy had it right except he can't go to the cops. Together, he and Murphy go on a quest to avenge Tyson's murder while maybe, probably, getting a little too close. I'm not mad about it.

Now that you know Perry Mattfeld, go back and check out all her other work, and maybe like some of those adorbs Insta pics with the puppies. Something tells me after watching her as Murphy you'll want to know more — so get ahead of it now.

In the Dark premieres on The CW April 4.