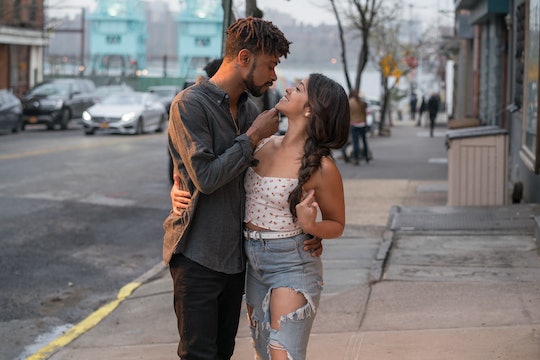 The Internet Has A New Boyfriend & He's Starring In 'Someone Great'

If you haven't already watched Someone Great on Netflix then you need to start as soon as you finish reading this. In the adorable comedy, Jenny (Gina Rodriguez), is moving from New York City to San Francisco for her dream job at Rolling Stone. The only problem is that Jenny's boyfriend of nine years breaks up with her rather than do long distance — jerk, right? Maybe not. Either way, you need to know who plays Nate on Someone Great because he's awesome. Lakeith Stanfield plays the heartbreaker in question, but don't that sour your opinion of the accomplished actor. Don't blame the artist, blame the art!

In any case, if you're not already familiar you're going to want a little more info on this hunk because something tells me he's about to blow up big time. So here's what I know.

Stanfield began his career in the short-turned-feature length film Short Term 12 opposite Brie Larson and his work has only gotten more impressive since then. He's been in some of the most critically-acclaimed films in recent years like Selma, Straight Outta Compton, and Get Out. Plus, he plays Darius on Donald Glover's Atlanta. Yeah —you are going to want to remember his name.

Stanfield doesn't mess around when it comes to picking quality films to work on, and that might be because he has no use for fame. He spoke with rapper Noname for the brand Celine's Document section and he did not mince words when it came to his feelings about the city of dreams. "You’re not in the Hollywood shuffle," he said. "You ain’t missing sh*t. If you know a garbage can, you know Hollywood ... It’s f*cking disgusting out here."

It's a harsh take, but a refreshing one, too. Stanfield admits that "you get to wear nice things." He's mostly focused on the work, and it pays off because he's gotten to play some powerful roles, like civil rights leader Jimmie Lee Jackson in Ava DuVernay's Selma.

"I’ve had guns pointed at me. I’ve been the recipient of a lot of bulls*it. [So Selma] was a powerful one for me, and I really felt like I was serving a bigger service being a part of that movie," Stanfield told Noname after describing an incident where he, his mother, and sister were hit with pepper spray watching one of his friends being held at gunpoint by police.

The New York Times' Cara Buckley calls Stanfield a "bit of a weirdo" but notes that his quirks are not without purpose, and may be the very things that make him perfect for roles like telemarketer Boots Riley in Sorry To Bother You. Some of Stanfield's more eccentric antics include randomly speaking in different accents during interviews, sitting down on the red carpet, or wearing grills just for the heck of it. But this is all intentional apparently. “I’ve tried to come to understand [the media] so I can play with it, without feeling like it’s trying to play me," Stanfield said in the Times.

Stanfield may be a "weirdo" in real life but as Nate on Someone Great he's nothing short of dreamy. I can't dislike Nate (even though he broke Jenny's heart) because he's never trying to hurt Jenny, he's just being real and sometimes that sucks.

But don't worry. If, like some people, you've now developed a full-blown crush on Stanfield, something tells me he's just getting started.