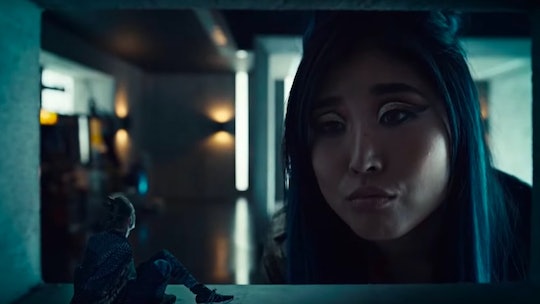 A New Version Of Media Joins Season 2 Of 'American Gods'

Gillian Anderson's Media was one of the most memorable deities in the first season of Starz's American Gods. Shifting effortlessly between iconic pop culture figures, she made an impact whenever she was onscreen. But Anderson left when showrunners Bryan Fuller and Michael Green did, and now a new version of Media will be taking her place. But who plays New Media on American Gods?

New Media didn't make an appearance in the first two episodes of Season 2, but it looks like she'll be birthed anew in "Muninn." When Media revives, she'll be played by actress Kahyun Kim — and she'll be a very different character than she was before. In an interview with Entertainment Weekly, Kim likened New Media to "an iPhone coming out for this generation, this new shiny present." Her power arises from those who worship at the altar of social media and she knows how to manipulate people into becoming her followers, online and off.

According to EW, it was important to Kim not to try to recreate what Anderson did with the character. She found it liberating to put her own spin on New Media, who has little to nothing in common with her predecessor, aside from an ability to access the minds of the masses.

Before stepping into the role of New Media, Kim had a wide variety of TV gigs under her belt. She took on small parts in Everyday Lies and The Mysteries of Laura early in her career, then appeared on Austin & Alley, as well as an episode each of Shameless and Timeless. She popped up in the movies Bad Match, The F*** Happened, and the TV remake of Freaky Friday. So far, American Gods seems to be her biggest recurring role, though she has quite a few projects on the horizon as well.

While speaking to io9, American Gods author and executive producer Neil Gaiman discussed why they needed to update Media — while making it clear that the original version of the character wasn't erased by her successor. He believed Media was "still out there wandering around," but her power was curbed by the fact that she had "less and less people watching her."

Social media is such a huge part of our society that there needed to be a New Media character to represent it. The obsession with and constant observation on Instagram, Snapchat, and Twitter led to Kim's incarnation of Media. She's even born in a shower of emojis and can conjured Snapchat-eque filters when she needs to make a point.

Viewers can meet Kim's New Media for the first time when she makes her debut in the third episode of Season 2.