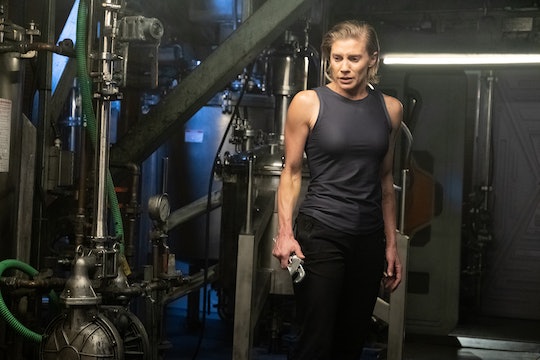 Katee Sackhoff Returns To Space In 'Another Life'

Netflix's new sci-fi series Another Life premiered on Jul. 25 with 10 episodes perfect for a weekend marathon. In the show, an alien Artifact lands on earth, which results in Commander Niko Breckinridge stepping up to investigate. Luckily, the person who plays Niko on Another Life has a lot of experience with science fiction. Actress Katee Sackhoff has really made herself at home in the genre, making her a fitting choice for Commander Niko.

Sackhoff has been working on television since the late '90s. Though she started off in TV movies (Fifteen and Pregnant shout-out!), she was soon landing recurring roles on more than a few series. Her first multi-episode arc was on Undressed; roles on The Fearing Mind, The Education of Max Bickford, and Bionic Woman followed. She popped up in an episode here or there of various shows, like E.R. and Cold Case. While she appeared in series like Nip/Tuck and 24, her most famous part is probably Kara "Starbuck" Thrace on Battlestar Galactica. It was a character that won her a dedicated fanbase over the years.

After Battlestar Galactica came to an end, Sackhoff satirized her sci-fi popularity by playing herself on The Big Bang Theory. She also took part in several films, including Riddick and Oculus, before returning to TV with Longmire and The Flash. There's a good chance you've seen Sackhoff in something before, because her list of credits is quite extensive.

Considering their genre similarities and shared star, Another Life and Battlestar Galactica are bound to be compared to one another. In an interview with Collider, Sackhoff explained that the reason she waited "10 or 12 years, or whatever it's been, to go back into space" was because nobody could compare her projects in the interim to Battlestar. The show was still earning new fans years after its premiere, which she described as the "biggest blessing." But it did complicated things, too, because audiences would compare all of her other characters to Starbuck. While that did make things trickier in some sense, it was something Sackhoff ultimately came to appreciate.

She described Starbuck as a "wild card" and dedicated soldier who was very emotional. Niko, however, was everything that Starbuck was not. "Niko is the opposite of that," Sackhoff told Collider. "Niko is educated and very well read, she's worldly, she's calm and collected and calculated, and she's very analytical." While she suspected comparisons were inevitable, the two characters couldn't have been more different in her eyes.

Sackhoff's involvement behind the scenes with Another Life was different too. She was a producer and, according to Collider, there was little more than a general premise to the show when she signed on. It allowed her to step into the writers' room and "really put what I feel is my fingerprint on the show." It was something she was looking forward to as the next step in her career.

Another Life might be slightly different from the space-set projects fans are familiar with Sackhoff from, but it seems like an exciting new frontier for her.