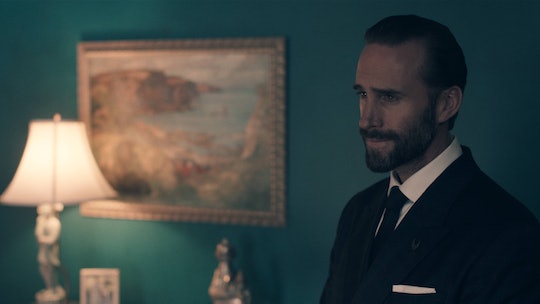 In Hulu's newest original series, Elisabeth Moss plays Offred, a woman in a totalitarian society who is forced to bear children along with the rest of the sparse fertile women left in the world. And in the series, she has a commander who serves as the leader of her household. But who plays Offred's commander on The Handmaid's Tale? Joseph Fiennes might look the most familiar from Season 2 of American Horror Story: Asylum, and this role isn't unlike that one in that he's playing yet another morally corrupt man in a place of power over women, anyway.

The commander’s name in the series is actually Fred Waterford, which is why Offred was given that specific name — because she is "of Fred," thereby marking his possession over her. Yeah, it's pretty much the stuff nightmares are made from. Thankfully, Fiennes isn't really a monster, he just continues to play one on TV. No one can say he doesn’t choose his roles wisely though, as he’s definitely memorable as the young priest from AHS: Asylum.

He also probably looks very familiar for all those who love the 1998 film Shakespeare in Love, where he starred alongside Gwyneth Paltrow. Since he’s so dedicated to each role he plays, it’s probably going to be hard to differentiate Fiennes from the character he plays in The Handmaid’s Tale.

Fiennes isn’t the only actor in his family though. You might also recognize Fiennes’ brother Ralph Fiennes from the Harry Potter movies as Lord Voldemort himself. So while Fiennes is totally going to make an impression as Offred’s commander on The Handmaid’s Tale, talent obviously runs in the family. He also has a twin brother, Jacob, another brother Magnus (who’s a composer), an archaeologist brother Michael Emery, and a filmmaker sister, Sophie. Of course, it’s no surprise that the family is full of artists though, as their mother, Jini Fiennes, was a novelist.

Although Fiennes starred in the 2016 movie Risen, taking on the role of Offred’s commander in The Handmaid’s Tale is still going to be one of his bigger roles since his time on AHS. The British actor seems to have a certain understanding of his character, noting that while the commander isn’t really a "good guy" in the series, he’s also looking for an emotional connection, which he gets with his handmaid, Offred, even though it's forbidden.

The actor has been in show business since the early '90s, but he told The Independent that he saw his first production at a very young age. "It was in south London and I was six years old. I loved every moment of it," Joseph said, referring to seeing a stage production of Joseph and the Amazing Technicolor Dreamcoat.

The first season of The Handmaid’s Tale will span 10 episodes and since the creators have taken the route of a TV series rather than a movie, it’s safe to say that they’ll be able to go pretty much anywhere with the series, should it take off, which feels like a guarantee at this point.