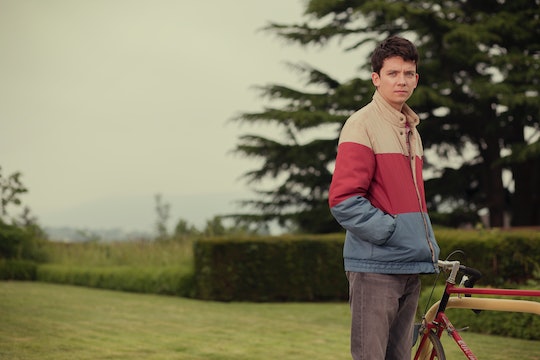 Netflix has been dominating the teen genre lately, and its latest offering, Sex Education, has received a lot of buzz. The premise, for those not in the know: A teenage boy, Otis, has been both burdened and blessed with having a sex therapist for a mother. His classmate, Maeve, convinces him to use his acquired know-how to make a business out of advising their classmates on all things sex. And things get wild. So who plays Otis on Sex Education?

That would be Asa Butterfield. You may recognize that unique name from the British actor’s impressive resume, including his starring turns as Jake in Miss Peregrine's Home for Peculiar Children and as the eponymous young hero in Martin Scorsese’s Hugo. Now 21 years old, Butterfield has been in the biz for some time now. He hit it out of the park with his first lead role as Bruno in the film adaptation of the extremely sad novel, The Boy in the Striped Pajamas, over a decade ago. He’s made a pretty smooth transition from child star to grown-up actor, though the real test will be when he starts landing roles where he gets to play an adult (he’s getting pretty close).

However, as far as teenage parts go, this one is pretty meaty. Butterfield told People that he was excited about Sex Education because “there was something about it… really I think just the relationships with the characters — it was so kind of honest and funny.”

Otis is, according to Butterfield, sort of awkward, but also knows a lot more about sex than most of his peers, despite being completely inexperienced. And though the show does have a decent amount of sex in it (I mean, if it didn’t, the title wouldn’t really make sense), Butterfield feels that it’s not gratuitous and it’s there “to inform the story.”

Interestingly, Butterfield’s own mother is a psychologist, though not, it would seem, one who specifically deals with sex. Still, he tells People that he probably won’t watch the series with her. Understandably.

Other interesting things about Butterfield are that he can (allegedly) type the alphabet in two seconds (how though?) and he makes excellent beans on toast, a popular British snack. According to his costar, Emma Mackey, “the secret is mayonnaise.”

What was nice for Butterfield this time around is that Sex Education is a comedy — at least, in part. He tells Teen Vogue that he relished the opportunity to make people laugh as Otis, and that though the high school virgin trope is overplayed, Otis is something of a “sex wizard” (his words, not mine), which makes his perspective unique. If you’re thinking of getting your Sex Education on, it’s nice to know that this experienced actor will be guiding the ensemble dramedy as the likable and relatable Otis.