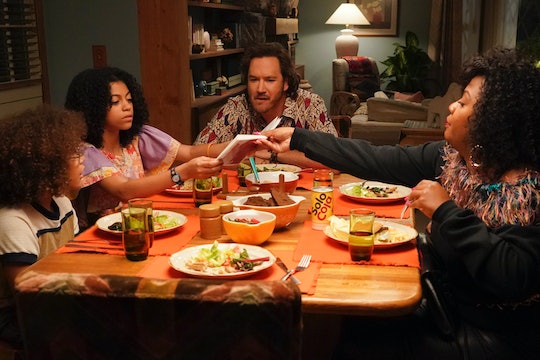 'Mixed-ish' Recast Its Dad With A Very Recognizable Face

Black-ish's second spin-off premieres this fall on ABC, and, unlike Freeform's grown-ish, which follows the family's oldest daughter Zoey (Yara Shahidi) to college, mixed-ish serves as a prequel about the childhood of Johnson family matriarch, Rainbow (Tracee Ellis Ross). Ross serves as the narrator for the series, which chronicles Rainbow's life as mixed race child with a black mom and a white dad. On black-ish, Rainbow's present-day dad is played by Beau Bridges, so viewers may be wondering who plays Paul on mixed-ish, which is set in the 1980s. Workaholics' Anders Holm was originally cast in the unaired pilot, but he was replaced by Mark-Paul Gosselaar in June, according to Variety.

Gosselaar is probably best and most iconically known for playing Zack Morris on Saved By the Bell and its subsequent spin-off series. But as Variety notes, this is his fourth network primetime role of the past few years after starring in a series of flops, including Fox's short-lived The Passage earlier this year, 2016's equally short-lived Pitch, and NBC's 2015 sitcom Truth Be Told. Hopefully mixed-ish can break his streak of single-season gigs.

Prior to his recent TV runs, however, Gosselaar famously graduated from teen heartthrob to successful dramatic actor on ABC's NYPD Blue, where he held a series regular role for the show's final four seasons. He also played one of the titular attorneys on TNT's Franklin & Bash from 2011-2015.

Much like black-ish, mixed-ish tackles questions of assimilation and cultural struggle when the Jackson-Johnson family is forced to move from their peaceful commune, where their three children have grown up, to a suburb after the feds break up what they view as a "radicalized cult." Ultimately, it's a fish-out-of-water story for the three Johnson kids, whose parents have, according to Entertainment Weekly, "no concept of what being 'mixed' means." They're forced to navigate their new life in a mainstream school, where they don't quite fit in with either the black kids or the white kids, and with little guidance from their parents on how to navigate their newly contentious relationship to race.

Both Ross and mixed-ish's showrunner Karin Gist are of mixed heritage, and Gist told EW that Ross sat down with the writers room to share some of her personal experiences growing up mixed for potential storyline inspiration.

If you haven't been watching black-ish or grown-ish already, that doesn't mean mixed-ish isn't worth a watch. In a joint E! News interview with his costar Tika Sumpter, who plays Rainbow's mom Alicia, Gosselaar assured audiences that a familiarity with black-ish wasn't necessary to enjoy mixed-ish as its own standalone show.

"You don't really have to know Rainbow Johnson [on black-ish] to understand what she's going through in our show, because [Ross' character] narrates the show," he explained, "and she talks about her journey through the '80s into where she is currently."

Judging by the stacked cast, it's a good bet mixed-ish could join its predecessors as a network powerhouse and fan-favorite. Of course, nobody will know for sure until it gets off the ground.