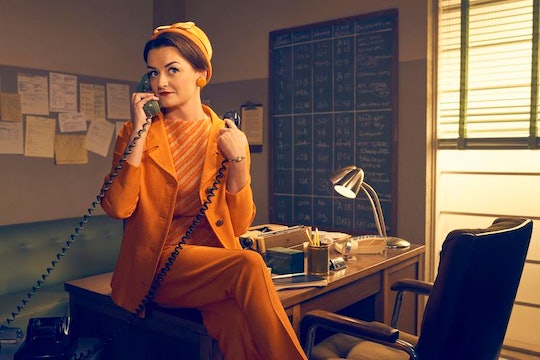 Pauline From 'Feud' Is A TV Drama Staple

Amidst Joan Crawford and Bette Davis' constant griping, and the men who set them up to tear each other apart, it's difficult to find any feminist heroes lurking in the background of Feud: Bette & Joan. But as the show's first season wraps up, it's clear that at least two women are committed to lifting up other women. One of them is Mamacita, Joan's maid who does some impressive census math to show how women's pictures will become important again. And the other is Pauline Jameson, an aspiring director who writes a script for Joan. So who plays Pauline on Feud? Alison Wright is one of dramatic television's most beloved actresses right now.

While she had been performing in films for several years, her breakout TV role came when she was cast as Martha Hanson on The Americans, an FBI secretary and unwitting fake-wife of Matthew Rhys' Russian spy character in disguise. The British actress brought huge sympathy to the role and she remains a fan-favorite. She also had a recurring part on the first season of Amazon Prime series from Bryan Cranston Sneaky Pete. Last year, she played Clarence Thomas' wife Virginia in HBO's Anita Hill biopic Confirmation, starring Kerry Washington. And she's poised to make her Broadway debut this year in Lynn Nottage's Sweat, a play about deindustrialization in a factory town.

Wright's role on Feud is just as juicy as her other work, if a bit more limited in scope. Pauline starts out as the loyal, trusty assistant to Whatever Happened to Baby Jane? director Robert Aldrich (played by Alfred Molina). In fact, she's the one who plucks the project from a stack of pitches and sells him on considering it. After working faithfully by his side through the completion of the film, she decides that she wants to strike out on her own. The only problem is, it's 1963 and female film directors aren't exactly a thing.

She tries her best by writing a script for Joan Crawford and pitching it to Mamacita, who loves the idea, but Joan thinks the idea of a woman directing a film is laughable. In fact, she thinks it's downright dangerous for Pauline to pitch her idea to studio execs for fear she might be thought of as ungrateful to work the job she's lucky enough to have as an assistant. Unfortunately, her boss Aldrich, while he believes in her, doesn't think it's possible for her to smash the barriers put in place by the industry. But Pauline is not totally without optimism.

Mamacita points out that, according to census numbers, women will soon be a majority of the population, forcing more power and control into their hands. Speaking from the other side, we're not quite there yet, but Pauline at least could have broken out in a couple of decades.