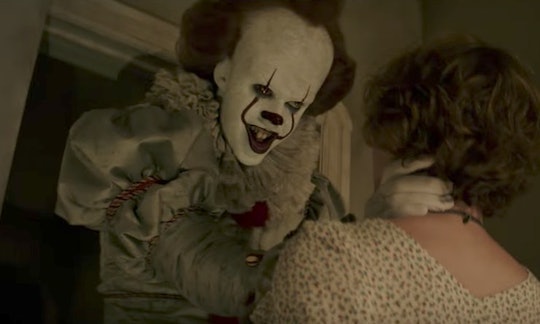 Over time, Pennywise has become the character people think of whenever the phrase "scary clown" pops up. Pennywise was first brought to life with sinister skill by Tim Curry in the 1990 televised version of It and has now returned to life in the 2017 adaptation of the original Stephen King novel. Pennywise has a distinct look, one that uses classic clown features (fluffy red hair, a powdered white face, and a curling red smile) and takes them to terrifying extremes. But who lurks beneath that creepy visage? Who plays Pennywise in the 2017 It?

Pennywise is played by Bill Skarsgård, whom fans might remember from his turn on Netflix's Hemlock Grove or the fact that his family is full of actors and models. Skarsgård looks distinctly different underneath the piles of Pennywise makeup — to put it mildly — but audiences might not have seen much of his real face during the promotional lead-up to It. That was because the studio wanted to maintain the character's mystery and not connect him to any specific actor (though Skarsgård's casting wasn't kept secret). Pennywise was an unknowable supernatural force, so the actor playing him had to be kept out of the limelight. But now the movie is out, so that's no longer a concern. Fans can enjoy looking at Skarsgård all they like.

Despite the fact that Skarsgård's face is hidden when he's in character as Pennywise, director Andy Muschietti cast him in part because of his look. Muschietti told Rolling Stone that during Skarsgård's audition, he "had an immediate reaction. What really resonated was that weird balance between his childlike features and a very dark performance, which is something that I wanted to bring to the character."

But a sense of mystery was important to Pennywise in more than one way as well. Skarsgård also avoided spending time with his young co-stars so that when filming began, their reactions would be grounded in something real. "I didn't hang out with them personally at all," Skarsgård told Rolling Stone. "So they didn't really know who I was, and they hadn't seen the makeup or the clown, until the first day of shooting with them. It was one of those really excited/fear reactions from their part. But it was fun, and the kids were little professionals."

Skarsgård comes from a family of performers (father Stellan and brother Alexander are particularly well-known), but he's been making a name for himself all on his own, too. In addition to Hemlock Grove and successes in his native Sweden, Skarsgård has appeared in the films Allegiant and, most recently, Atomic Blonde. His IMDB indicates he's got quite a few projects lined up for the future in both movies and television — including the forthcoming sequel to It.

It looks like Skarsgård will be terrifying moviegoers for years to come, though hopefully only in costume.