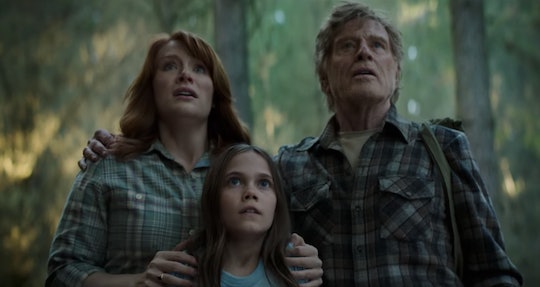 Who Plays Pete's Parents In 'Pete's Dragon'? They're Both Real Life Parents

Disney's latest film, Pete's Dragon, is already winning over viewers, and why wouldn't it? It's got a Mowgli-ish jungle boy, a dragon, and two classically cool parents who will make the film for audiences. The actors who play Pete's parents in Pete's Dragon are, after all, not only awesome actors, but they're parents themselves. The couple that take Pete in in the movie are played by Bryce Dallas Howard (who takes on the role of Grace) and Wes Bentley (who plays Grace's fiancé, Jack).

Howard, who's known for her roles in Jurassic World, The Help, and Twilight, has two tykes of her own: 9-year-old Theodore and 4-year-old Beatrice. "It’s a crazy time in my house," she told Bustle in April. "[Theodore] is like a person, he’s like a pre-teen. And then with my 4-year-old, it’s just that delicious age where they really, really love you and want to cuddle with you. I know there’s potentially an end to that [but] I mean, I’m loving that.”

According to the two child actors in Pete's Dragon — Oakes Fegley (who plays Pete) and Oona Laurence (who acts as Natalie) — Howard herself was an amazing on-set mother to them, as well. "They were really, really, really cool people and they were both very parent-ish on set," Fegley told Bustle. "Bryce is always like fixing your hair. She’s also very protective."

Bentley, the American Beauty actor who plays Fegley and Laurence's father on-screen, has two young kids of his own, both under 3 years old. "I didn’t know I was going to love being a dad so much," he told People last year. "Now it’s the only thing I want to be. I just want to be a great dad. Everything I’m doing, I’m trying to incorporate being a good dad."

And it sounds like that's an outlook Bentley brought onto into the studio when Pete's Dragon was filming. "We’d all joke and play together," he told Bustle. "They felt like my kids. I cared about them, I wanted them to be comfortable and safe, that’s the feeling you get when you’re around kids."

Not only did Howard and Bentley bring acting talent and years of experience into the movie, but they were also clearly amazing parents both on and off-screen while filming. I think the big question now is: when will we be seeing a Pete's Dragon sequel, so that this fictional family can reunite?