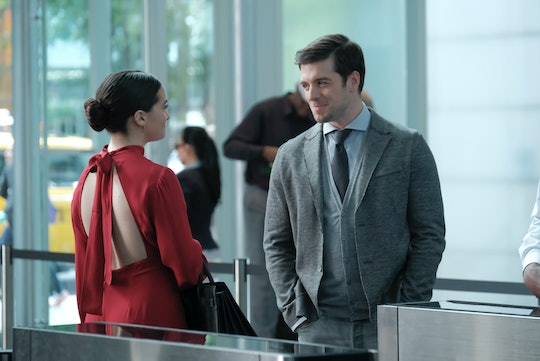 Pinstripe Returns To 'The Bold Type' For Season 2

Throughout the first season of The Bold Type, Jane was romantically involved with a writer at a rival publication called Pinstripe. Though his real name was Ryan Decker, she always referred to him by his place of work instead. He'll be back in the Season 2 episode "OMG" and there's no telling how long he'll stick around this time, so it's worth getting to know both the character and the actor who plays Pinstripe on The Bold Type a little bit better.

Dan Jeannotte plays Jane's ex, who will be popping up in Season 2 to help her spice up her writing style a little as she navigates the world of freelancing. He's got some experience with being unceremoniously fired since he was let go from Pinstripe back in Season 1, so he and Jane will have some common ground to catch up on when they cross paths. It might even be enough to spark another round of their romance.

Jeannotte is a Canadian "actor, improviser, voice artist, and writer," according to his IMDB biography. He's had a couple of notable roles outside of The Bold Type: you might have seen him on Reign as James Stuart, the Earl of Moray, or on The Good Witch as Brandon Russell.

But that's not all. Jeannotte played Greg Bowen in a few episodes of Designated Survivor and has appeared in an episode or two of the following shows: Fargo, Beauty and the Beast, Dark Matter, and Being Human. He's a regular in short films and TV movies, like The Cutting Edge: Fire & Ice and Deadly Hope. Jeannotte has certainly been busy since his onscreen career took off in 2006. He has also done motion capture and voice work for the character Arno Dorian in the video game Assassin's Creed: Unity.

According to IMDB, Jeannotte is big in the Canadian comedy scene too, and toured with the troupe Uncalled For. Improv was how he first became interested in acting; in an interview with Talk Nerdy With Us, Jeannotte explained that auditioning for a friend's comedy troupe (the very same one he still tours with today, 17 years later) made him realize that acting might be the career path for him. He had initially considered becoming a writer, but said that theatre and acting "just kind of clicked."

Jeannotte's participation in theatre led him to meet the woman who would become his wife, Heidi Hawkins. They were both cast in a production of William Shakespeare's As You Like It and soon fell for each other. They later welcomed a son. "There was instantly something between us," he told Post City Toronto, going on to say:

But we couldn't admit it because we were actually both in relationships at the time. Our characters get married at the end of the play, and we shared a kiss onstage. Somehow that kiss seemed to get longer during every performance. Years later, the director who cast us in that show was the officiant at our wedding.

Jeannotte seems to be just as hyped for Pinstripe's return to The Bold Type as the audience is, tweeting that he was "giddy" to announce that he was coming back to the show. "I honestly think this show is so great," he wrote. "I'm impressed with & proud of the creative team & the cast; I just feel lucky to a small part of this A+++ project [sic]."

It's nice to see that Jeannotte is as much of a fan of the show as the viewers are. Maybe this time Pinstripe and Jane will finally be able to iron out their issues and make their relationship work.