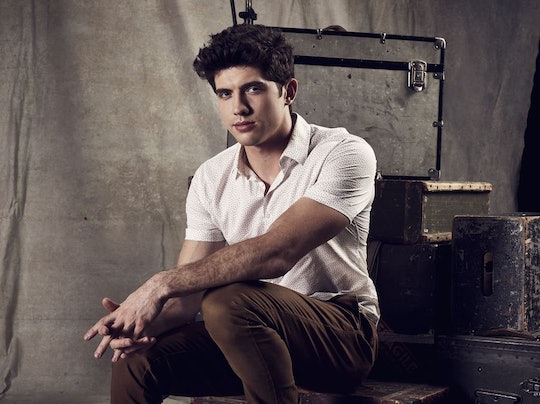 Fans May Recognize Rainer On 'Famous In Love'

Freeform is losing a lot of shows this year. Both Switched at Birth and Pretty Little Liars are coming to an end, so it's no surprise the network is bringing in some new programming. Thankfully, Pretty Little Liars executive producer I. Marlene King was happy to adapt another book into a new TV series for fans to obsess over. Famous In Love is based on the novel by Rebecca Serle and will follow the story of Paige, an ordinary college student, who gets thrust into fame after getting cast in a Hollywood blockbuster. Along with fame, Paige meets new people, including Rainer Devon. So who plays Rainer on Famous in Love? Carter Jenkins got the role.

Besides Bella Thorne, who plays Paige, Jenkins is probably the most recognizable person in the cast. He's been appearing in movies and TV shows since the early 2000s. Most notably, he had a recurring role on the popular Nickelodeon series Unfabulous, which starred Emma Roberts. He also had starring roles on the short-lived NBC series Surface and BBC's Viva Laughlin. Besides that, he's also made appearances on House, CSI: Miami, The Bernie Mac Show, Lie to Me, Chosen, The Following, Mad Men, Aquarius, and most recently, Sweet/Vicious.

On the big screen, you may recognize Jenkins from Bad News Bears, Valentine's Day, Struck by Lightning, Summer of 8, and Nightlight. It's clear Jenkins is used to being onscreen, so he'll definitely relate to his character Rainer.

Based on the promos, it looks like Rainer is already a star and will be acting in the movie alongside Paige. In fact, he's the one that calls her and lets her know she got the part. It also looks like there will be some kind of romance between the two and possibly even a love triangle with their other cast mate Jordan Wilder, who's played by Keith Powers.

Right now, there's not much else known about Rainer, but thankfully viewers won't have to wait long to learn more about him. After the series premieres on April 18, the whole 10-episode first season will be available for streaming on Freeform.com and On Demand. Therefore, if you're already hooked by the first episode, you won't even have to wait to see what happens next. And since this show is made by the same people who brought you PLL, there's no doubt you'll be sucked in.

So make sure to check out Famous in Love when it premieres right after the final season premiere of Pretty Little Liars on Freeform starting Tuesday, April 18 at 9 p.m. ET.