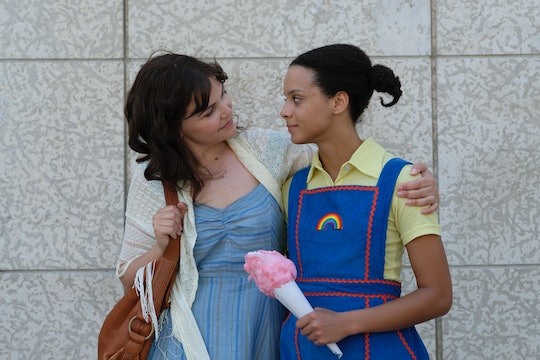 Lifetime takes on the foster care system and the affects it had on one young girl, Regina Louise, in the film, I Am Somebody's Child. You'll need multiple boxes of tissues for this one. Based on Louise's real life journey navigating the foster care system — where she'd been in over 30 foster homes and psychiatric facilities between ages 13 and 18 — this is a must-see film for the whole family. With such a heroic journey, you'll wonder who plays Regina Louise in I Am Somebody's Child.

Angela Fairley play Louise in the film and will quickly become your newest fav — so remember her name. As of now, there isn't a ton of public information out there on Fairley, other than the fact that she's also been in the foster care system. That either means she's private or hasn't done a lot of press. According to her Twitter account, she doesn't have many followers and has mostly tweeted about I Am Somebody's Child, which looks to be her biggest acting credit thus far. However, you may have seen her as Nia in the Google Web series, GodComplx. She has a couple other projects in post-production, so it looks like this is only the beginning and you'll see more of Fairley in the months and years to come.

In any case, Fairley is pretty active on Instagram, with a slightly larger following than on Twitter. If you scroll through her feed, you'll find pictures of her modeling, behind the scenes, and with her fellow castmates having the time of her life. Get it, girl.

I Am Somebody's Child is aiming to continue conversations about cracks in the foster care system — as with what happened to Louise — to bring national attention to foster care reform. Based on Louise's books, Somebody’s Someone and Someone Has Led this Child to Believe, the movie isn't only about Louise's journey through foster care, but the story behind the woman, Jeannie Kerr (Goodwin), who petitioned for adoption only to have it denied — because she was a white woman. After the racist ruling, Louise and Kerr go their separate ways. Louise went off to college and to begin her career writing those books and touring the country as a motivational speaker, while Kerr (married name Taylor) got married and had a child after moving south. Then, 25 years later, the two appeared in the same courts that denied them before, to legally and officially finish the adoption process.

While the movie is sure to hit you in all the feels, there's a definitive message of hope throughout. Fairley as Louise makes it particularly personal, since she's been in the system, too. Pastor, author and filmmaker T.D. Jakes signed on as an executive producer and the film also stars Ginnifer Goodwin, Kim Hawthorne, Sherri Saum, and Monique Coleman.

You may not have heard of Fairley before this but now you can get her on your radar ASAP. Between her previous work, the work that's to come, and the present with I Am Somebody's Child, Fairley has that special something that pulls you into every project she's involved with. Plus, as someone who's been through the foster system herself and come through the other side? Pure inspiration.

More Like This
All The Nights Hocus Pocus Airs On TV In October 2022
Kim Kardashian Stars In Hilarious House Of The Dragon Parody, The Targashians
Lifelong Teacher Dr. Jill Biden Loves Watching Abbott Elementary Too
10 Parenting Lessons From Abbott Elementary That You'll Want To Write Down