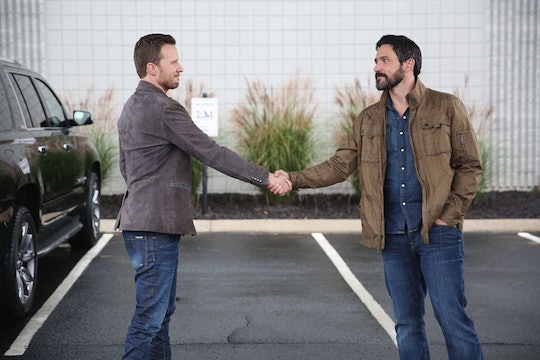 Who Plays Riff Bell on 'Nashville'? Steve Kazee Is More Than Qualified

With Juliette Barnes out receiving treatment for postpartum depression (echoing actress Hayden Panettiere's real-life hiatus from Nashville for the same reason), Luke Wheeler needs a new act to join him on tour. Wednesday's episode of Nashville introduces us to that new act joining Luke, Riff Bell. According to the episode description, Riff is an old friend of Luke's, so clearly we're going to love him. But who plays Riff Bell on Nashville? Steve Kazee is more than qualified to join the Nasvhille cast as the new act on Luke's tour.

First things first, who even is Riff Bell? Riff is an old friend of Luke's and ex-country music star turned low-key family man and farmer. Deadline says that Riff was once a country music star at the top of his game, with everything he could have ever wanted. He had it all — the records, the fame, the women, the partying. He then met Heidi, an up-and-coming performer, who he chose to drop everything for. It seems like Riff welcomes Luke's offer to step back into the limelight, as the two are working together to make Riff's return to the stage happen.

You may recognize Steve Kazee, the actor playing Riff, from his recent turn on Shameless, where he played Fiona's husband Gus after a quickie wedding last season, before their predictable divorce.

While his character on Shameless was also in a band — we got to watch him sing and play a little guitar — Kazee is actually a Tony and Grammy Award-winning performer, who earned the accolades for his role in the Broadway musical adaptation of Once. He was also in the musicals 110 in the Shade and To Be Or Not To Be.

Kazee is set to play Riff as a recurring role on the series, so you can be sure that he'll be busting out the guitar on Nashville in no time (probably giving Luke a run for his money). Bring it on.