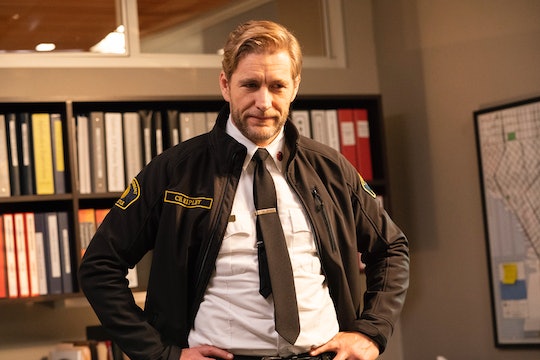 Station 19 has been linked to Grey's Anatomy from the beginning, because it started as a spinoff. Now the two shows are coming back together again in a two-hour crossover event on ABC on May 2. When Station 19 Chief Lucas Ripley is brought into Grey Sloan, he needs Maggie's capable care to make it through. If you've never checked out the firefighter drama, you may be curious about who you're dealing with here. Who plays Ripley on Station 19?

Brett Tucker is the fire chief who will be checking into Grey Sloan whether he likes it or not. Tucker is an Australian actor who got his start back home before making the transition to TV in the U.S. He landed several small parts in TV shows throughout the late 1990s and 2000s before taking on a recurring role in iconic Australian soap Neighbours. Tucker was on the show on and off from 1992 to 2010 as Daniel Fitzgerald, though that wasn't the only show keeping him busy at the time. He was also on The Saddle Club, McLeod's Daughters, and Spartacus — and those are just his regular roles. Tucker has popped up in so many shows for an episode or two that odds are you've seen him somewhere before.

In addition to landing longer arcs on Newton's Law and The Americans, Tucker starred on Mistresses for four seasons. In between his lengthier TV stints, he appeared on CSI: NY, CSI: Crime Scene Investigation, NCIS, Rizzoli & Isles, and Castle, among others. He even had a small role as a guard in Thor: The Dark World. Basically, Tucker has been keeping his schedule stacked for the last few years; he's been so busy snagging roles that I'm getting jealous of his hustle.

But it wasn't always smooth sailing for Tucker. In 2017, he spoke to Now To Love about his first attempt at making a go of it in Los Angeles, which didn't go well. He said that he found the city "quite overwhelming" and had trouble finding work. He revealed that he thought he'd "blown it," which led him to return to Australia. But shortly afterwards, he ended up on both Neighbours and MacLeod's Daughters, so it seems like everything worked out for the best.

He's alternated working at home and overseas since then. "Working in your own country is king of a relief, to be honest," Tucker said. "[Newton's Law] is uniquely Australian and I've missed being part of the industry."

Tucker's professional career may be easy to keep track of, but his personal life is much more private. He doesn't appear to have social media accounts (at least not public ones), so you won't be able to appreciate his tweets or ooh and ahh over his Instagram photos. They just don't exist! If you find yourself falling for Chief Ripley when he's brought into Grey Sloan, then your only option may be to follow him back to Station 19. Or just wait for the next crossover to roll around.