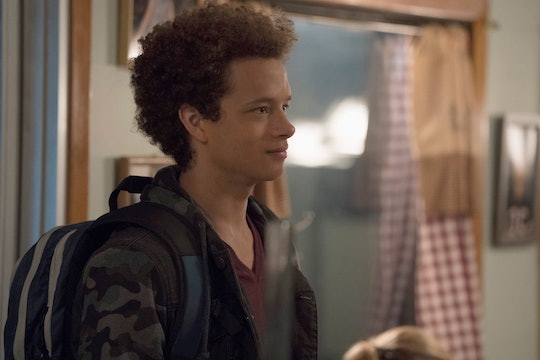 Robbie Will Prove To Be A Breakout Star On 'Rise'

If you were a fan of Glee then NBC's new series, Rise, is probably perfect for you. The new show, which is inspired by the nonfiction book Drama High, centers around a group of kids in a working-class community, who find inspiration after joining the school's theater program. One of those kids is Robbie, but who plays Robbie on Rise? Newcomer Damon J. Gillespie is sure to be a breakout star.

For Gillespie, Rise is definitely his first big TV role. Around this time last year, Gillespie was working in New York at Dunkin' Donuts, according to Times Free Press. Gillespie attended Chattanooga Center for Creative Arts for high school before going to Roosevelt University in Chicago. He then got his start on Broadway, beginning with small roles in Newsies in 2012. He then played Chino in a Carnegie Hall production of West Side Story, before joining the ensemble cast of Aladdin on Broadway and then The Prom in Atlanta. Gillespie first made his way to TV in a small role on Inside Amy Schumer in 2015 and getting cast as Robbie is his first major television job, which he's, of course, excited about.

Unlike Gillespie, his character wasn't at all interested in theater until his English teacher, played by How I Met Your Mother star Josh Radnor, approached him about joining the high school musical. "Essentially, Robbie is a little resistant; he doesn't do theater at all," Gillespie told Times Free Press. "He doesn't know how to take it (when Radnor wants him to audition), and he's not really into it."

However, once he connects with a girl — played by Moana's Auli'i Cravalho— Robbie's opinion of theater begins to change. "So when he auditions and meets the girl he's had a fondness for, he gives it a chance," Gillespie said. "He reads the play and connects with it."

The series has unsurprisingly caught some attention for seeming to be so similiar to Glee, but Gillespie insists Rise is its own show. "I've seen Glee and watched Smash, and what they did for musical theater, as an artist I owe respect to them," he said. "But what's different about our show is that the audience is seeing the process of putting on a musical. We won't be singing about our feelings. We're putting on a show throughout the season."

Thus, rather than seeing the characters just burst out into song throughout the series, most of the time the singing will be happening right on the stage. That's not to say the music won't be interwoven with the drama of the series, but it will be thoroughly connected to the theater production of Spring Awakening the kids are putting on.

As for Gillespie's personal life, he's happily engaged to Grace Aki, a YouTuber, and they're total couple goals. They pretty much do everything together from working out, hanging on the beach, and dancing. Aki has also spent a lot of time on the set of Rise and Gillespie makes regular appearances on Aki's YouTube channel. It's clear these two have a great time together and love each other to bits.

Besides having an awesome fiancée, Gillespie seems to just love to have fun. His Instagram is filled with photos and videos of him having a good time with his friends and with the cast of Rise. He also enjoys posting videos of him singing, so if you want to hear more of his incredible voice you can definitely just go and check out his Instagram.

To see Gillespie in his breakout role you can watch Rise when it premieres on Tuesday, March 13 at 10 p.m. EST on NBC.