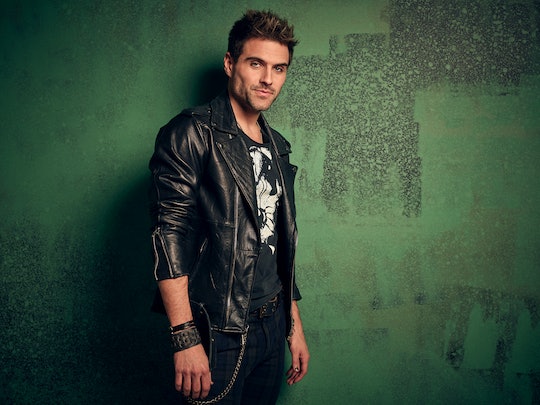 Rent: Live is on Fox and every self-proclaimed theater nerd is biting their nails clean off. The iconic broadway production has been entrusted to a new group of faces to grace your TV screen, playing the roles you know and love. One of which is struggling musician, Roger — an HIV-positive recovering addict. You may have studied up on the actors playing Mark, Mimi, Maureen, Angel, Joanne, and Collins, but who plays Roger in Rent: Live?

While Adam Pascal was the original Roger in the movie and on Broadway, Brennin Hunt will take on the live TV version. But possibly his name doesn't sound that familiar. Some of his acting credits, according to his rather brief IMDB page, include a one-time stint on Nashville, and the upcoming 2019 film, Walking With Herb (starring Edward James Almos and George Lopez and also featuring Hunt's original song "Can't Hold a Candle"). Most notably, he's known for playing, well, himself. That's right. Hunt auditioned for the U.S. version of The X Factor's first season in 2011. He didn't win but perhaps the experience on the silver screen prepared him to play Roger. Rent: Live is his first "big" role" on TV (when not playing himself)

So the question remains, does Hunt have what it takes to fill those iconic Rent shoes? He definitely has the musician part down. Roger's whole M.O. is that he used to be a successful singer and guitarist but finds himself struggling with HIV and addiction. As anyone with mortality on their mind, he dreams of penning one song of meaning before his death. That's easier said than done when dying is all you and everyone around you thinks about — especially since his girlfriend, April, took her life after her own HIV discovery. The character is so full and fleshed out, it'll take some serious acting skills on Hunt's part. I think he can pull it off, TBH.

Hunt's Instagram page is mostly full of him and his castmates and duh — that's because it's happening so soon and probably took forever to get to this point. There are also plenty of thanks and gratitude for his lovely wife and two boys and yes, it's appropriate to say "aww" right about now (and if seeing a married man gush over his beloved wife of many years isn't your thing, avoid his Instagram at all costs).

The Pulitzer Prize-winning musical, Rent, originally ran on Broadway for over 12 years. this new TV version features a sublime cast of both superstars and relative unknowns. The original Rent musical, written by the late, great Jonathan Larson, is set in New York City's East Village during the height of the AIDS crisis and became a necessary cultural conversation that's still relevant today.

The live event, much like Grease: Live which aired in 2016 (and also starred Vanessa Hudgens and Jordan Fisher, proving how far their talents go), will be sort of a pseudo version of going to a Broadway show. Consider this your chance to catch one of the most critically-acclaimed pieces of musical art in history. And when it's live, anything can happen.

Whether you know of Brennin Hunt or not, his portrayal of Roger could be a breakout situation. Regardless of how it turns out, it's Rent, people. Watch, enjoy, and support the fresh-faced cast or Fox may decide you will no longer get nice things.