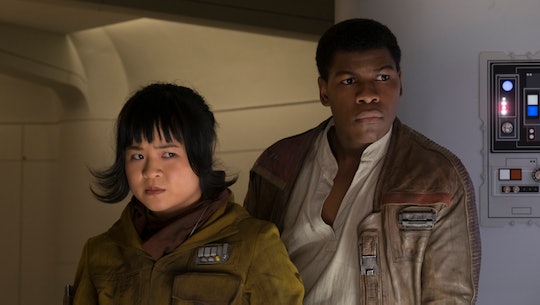 Star Wars: The Last Jedi welcomed back the cast from The Force Awakens, but also added some new faces to the team. One character making her debut is Rose Tico, a Resistance mechanic who becomes embroiled in the story thanks to a growing friendship with Finn. But who plays Rose in The Last Jedi? Actress Kelly Marie Tran took on the role.

Described by director Rian Johnson as "the biggest new part in the movie," Rose wasn't someone who was interested in joining the fight. But though she might have been reluctant, she soon found herself involved in the action anyway. At a panel for the film at the Star Wars Celebration event in Orlando, Florida, Johnson said, "She's not a soldier. She's not looking to be a hero, and she gets pulled a very big way into an adventure in this movie with Finn."

According to Tran herself, Rose is the kind of person who is logical in her approach to situations and very aware of the dangers of the world she's living in. "Something that I really like about Rose, she's sort of always on a mission," Tran told Entertainment Weekly. "She is a very practical person, she's very pragmatic." Rose is also used to not being the star of the show, because she's surrounded by characters who take up more of the spotlight in-universe than she does — including her sister Paige, a Resistance gunner on the front lines played by Veronica Ngo.

But her journey with Finn may let both characters evolve; Finn can continue to outgrow his past, while Rose can find her inner hero.

Tran may be a newcomer to the Star Wars universe, but this isn't her first time in front of the camera. However, none of her previous project have been as well-known as the colossal franchise that is Star Wars, which is about to launch her to a new level of stardom. Tran started off in short films and episodes of TV shows, tackling longer arcs in About A Boy, Ladies Like Us, and Gortimer Gibbon's Life on Normal Street. She was part of the cast of CollegeHumor Originals, which was perhaps her biggest recurring role before The Last Jedi, which is also her first movie.

Tran wasn't a particular Star Wars fan before being cast as Rose, and hadn't even seen any of the films (1970s originals included). That ended up suiting her situation well, because Rose was so new to everything, too. But it created some cognitive dissonance for Tran to be a very normal working actress suddenly thrown into such a huge film. "I feel totally Hannah Montana," she told Rolling Stone. "Like I have that life and I also have a normal life."

There's no doubt that The Last Jedi will change things for Tran going forward, and not just because it's a slight step away from her comedy background. In the same interview with Rolling Stone, she explained that advice from Carrie Fisher on set inspired her to chase some of her other dreams. "I eventually want to write and direct and produce my own stuff," Tran said. "That's a long journey that I'm starting because of that advice from Carrie. I'm one of those people where if I get a piece of advice from someone I look up to and respect, I'll really listen to it."

Rose promises to be Tran's breakout part, taking the previously-unknown actress and turning her into a household name. That Tran's journey reflects Rose's so well — in that she was also on the sidelines before being suddenly thrown into the limelight — just kind of feels like fate.